Jory Ludek had a hard night of whoring and drinking and didn’t expect to be woken up so early as he lay in a bed in one of the sleeping rooms of a cantina. His partner, a cantina girl who had been paid for her time and efforts, took one look at the large bearded man and his shotgun and silently fled the room as directed. Bounty Hunter Bodie Kendrick is the man directing her actions as he intends to take Joey Ludek back to Socorro in the New Mexico Territory dead or alive. While he would prefer to keep his prisoner alive, either way works for him as he intends to collect on the stated bounty on the wanted poster. 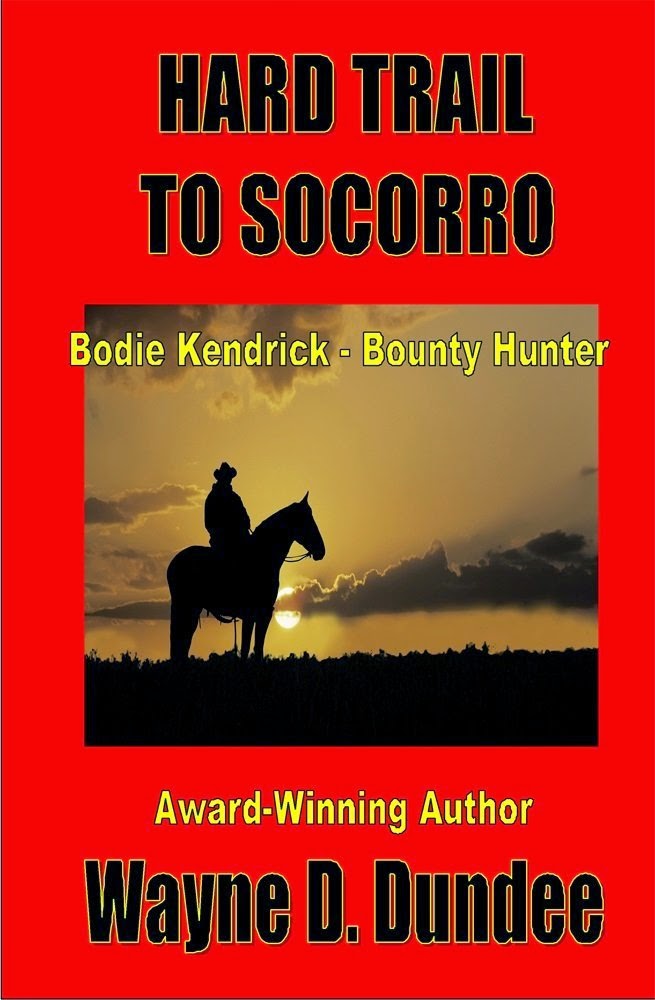 Bodie Kendrick has a bit of a reputation in the early 1880’s as does Ludek based on the wanted poster. With a couple of incidents in El Paso and Apaches on the warpath nearby Kendrick figures there is more than one reason to get the heck out of El Paso as fast as he and his prisoner can go. The title makes it very clear that it is going to be a brutally Hard Trail to Socorro.

The first book of the Bounty Hunter Bodie Kendrick series this western read is a mighty good one. Filled with deceit and double cross, plenty of action, and a revelation or two Hard Trail to Socorro delivers a fine western from author Wayne D. Dundee known for his Joe Hannibal mystery series that this reviewer has yet to read (several of which are in the TBR pile). This award winning author has quickly gained a reputation for writing excellent traditional westerns. Hard Trail to Socorro is another example of that ability and a mighty good read.

Material was either picked up awhile back via funds in my Amazon Associate account or when the author made the read free. I have no idea now which way it was and Amazon does not make a distinction as both situations are classified as a “verified purchase.”