Barry is back again this week for FFB. Make sure you check out the full list of books over at Patti’s blog.

When I was twelve years old I read my first Perry Mason mystery, The Case of the Vagabond Virgin, and I was hooked. I read a dozen more, one right after another, until I was over-saturated with Erle Stanley Gardner’s style and approach in this particular series. (He had a multitude of series, and his style varied accordingly, as I learned over time.) Many years went by before I picked up another Mason novel. As a result of that experience, I generally made it a point to avoid consecutive readings of works by a given author, lest I burn out on him or her. There were probably a few exceptions, but I never binged on anyone else to the extent I did with Gardner. 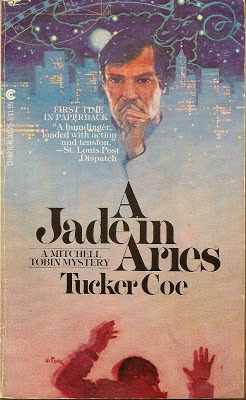 I mention this because I read the book under consideration here, which was written by Donald E. Westlake under his Tucker Coe pen name, immediately after finishing Drowned Hopes. The books are radically different in style and approach—A Jade in Aries is not remotely comical, whereas Drowned Hopes emphatically is—and each is, in turn, very different from the novels he wrote under his Richard Stark pen name.

A Jade in Aries is the fourth in a five-book series narrated by former NYPD detective Mitchell Tobin, a man disgraced and punishing himself for it by literally and figuratively both digging a hole to retreat into and walling himself off from society as much as possible. He does not have a private detective’s license, but has occasionally undertaken investigations to supplement the money his wife Kate earns from a part-time job.

This story begins when Tobin is approached on Wednesday, January 7th, by a young gay man, Ronald Cornell, owner of a men’s boutique. He insists that his partner—personal and professional—Jamie Dearborn, was murdered, and that the police detective, Aldo Manzoni, won’t do anything about it, having written it off as what he calls a case of the “Changeable Sailor.” Disbelieving this, certain that Jamie’s killer is someone he and others in his circle know, Cornell is determined to identify him. He is seriously into astrology, and only needs Tobin’s help to find out the exact dates and times of birth of the six men he’s narrowed his list of suspects to. Tobin calls an old cop friend in Missing Persons, tells him what he needs, and then tells Cornell to call the friend directly the following Monday.

Over breakfast Tuesday morning, Kate Tobin reads a newspaper story she shares with her husband, he having told her about his meeting with Cornell. The story says Cornell is in the hospital after an attempted suicide. Based on the alleged method and what he observed about Cornell, Mitch Tobin refutes the story, sure that Cornell was assaulted, but refuses to get involved. When Kate 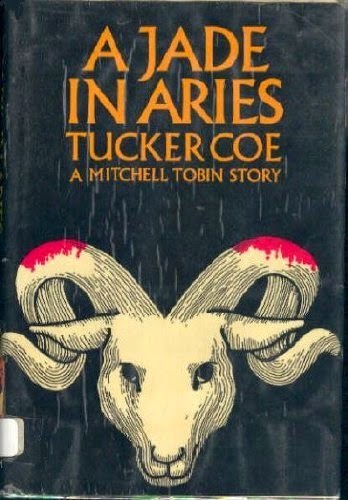 subsequently—trying to wear down his resistance—tells her husband that she visited Cornell in the hospital, that he has made an extremely generous offer in exchange for Mitch’s help—and they can certainly use the money—that the bigoted, homophobic Detective Manzoni insists Cornell is emotionally unbalanced and should be institutionalized, Tobin caves in and undertakes the investigation. The result is an absorbing character-driven story as Tobin deals with a variety of personalities, including the oppositional Manzoni, from the Cornell/Dearborn social circle to solve Cornell’s assault and two murders.

Homophobes are unlikely to read A Jade in Aries. More enlightened readers will probably have to make, as I did, reactive adjustments concerning the context of the time in which it was written, specifically with regard to language and attitude. I was 23 when it was published and don’t recall gay being a synonym for homosexual back then. Thus, homosexual is the term used throughout, unless someone disparagingly says queer or faggot, as some characters do. One who uses faggot a couple of times is Tobin himself, which I found somewhat disconcerting since he’s sympathetic to Cornell’s plight, and treats those in Cornell’s coterie the same way he’d treat heterosexuals: with respect or contempt based on how they comported themselves and responded to him.

In Chapter Eight, looking at his fifteen-year-old son, Tobin briefly wonders whether the boy might become homosexual, as if it were a matter of choice or upbringing: “I don’t know if I can be proved right or wrong, but I hold to the belief that homosexuality almost always shows a failure of some kind on the part of the parents. The failure of the father to be a man, or of the mother to be a woman, or of both to give their child security and love. Whatever the particular style of the failure, I think it almost always lies in the parents when the son emerges to adulthood as a homosexual.”

Reading that, I couldn’t help but wonder if it was strictly Tobin the fictional character speaking, or if it was Westlake the author using Tobin as a conduit for his own beliefs. If the latter, I wonder if Westlake’s attitude changed during the decades prior to his death as more became known about human sexuality.

I found A Jade in Aries engrossing, compelling, and hard to put down, even though I wouldn’t necessarily call it a “great” mystery novel, and can recommend it to those who don’t object to a major aspect of its subject matter.

You're right about the need to put a book in its historical context. A JADE IN ARIES might not be "politically correct" according to today's standards but it was written decades ago. It's like the schools who ban Mark Twain for what he wrote over 100 years ago.