Back in October 2007 Barry first reviewed MR. MONK GOES TO THE FIREHOUSE by Lee Goldberg here on the blog. It seemed that today was a good time to run the below review again. Head over to Todd Mason's blog for the rest of the suggestions for today. 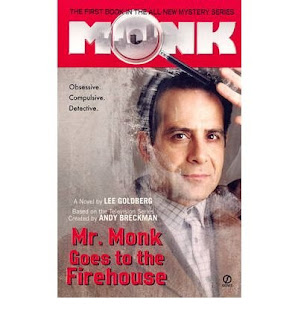 None has captured the public’s attention the way the USA Network’s Adrian Monk has.


The obsessive-compulsive, multi-phobic Monk combines Sherlock Holmes’ skill for observing the minute details of everyday life the rest of us miss with a childlike innocence and incomprehension of the way most of the world operates. A former San Francisco Police Department homicide detective whose tics became more extreme after his wife was murdered, he now works as a private detective and, most frequently, as a paid consultant to the SFPD, usually at the behest of his friend Captain Leland Stottlemeyer.


Mr. Monk Goes to the Firehouse is the first in a series of original paperbacks based on the TV series. Lee Goldberg was a writer for and executive producer of “Diagnosis Murder” and has written novels based on that program plus The Man With the Iron-On Badge (Five Star). He has written several episodes of “Monk,” and so is very familiar with the series’ format and recurring characters.


The novel is narrated by Monk’s assistant, Natalie Teeger, the widowed mother of a twelve-year-old daughter. Events begin when Monk’s apartment building is scheduled to be tented and fumigated for termites—that Monk himself discovered: “He spotted a pinprick-sized hole in a piece of siding and knew it was fresh. He knew because he keeps track of all the irregularities in the siding.” When Natalie asks him why, he answers, “Doesn’t everybody?”

Knowing he won’t be able to deal with staying at a hotel for the duration, Natalie invites him to move in with her and her daughter Julie, and Monk accepts. Julie is upset when she learns that Sparky, the local firehouse dog Firefighter Joe annually brings to school with him when he lectures on fire safety, has been brutally murdered by a person unknown. Monk promises Julie he’ll uncover the killer.


His investigation takes him to the scene of a house fire in which a chain-smoking woman named Esther Stoval has died, apparently the victim of her own carelessness. Monk quickly determines she was murdered, and soon after realizes that her death and Sparky’s are connected.


Halfway through the novel, after interrogating a number of suspects who have solid reasons to want Esther Stoval dead, Monk determines which of them is the murderer. Breaking that person’s alibi proves harrowing if not impossible: the second half of the book requires him to track down the piece of damning physical evidence that will convict the murderer. He faces the daunting—and comical—task of wading through the city’s garbage dump to try to find it.


Along the way, with an unassuming brilliance and humility foreign to Sherlock Holmes, Monk solves a number of unrelated murders.

The “Monk” TV scripts, because of time constraints, often subordinate mystery to humor. In Mr. Monk Goes to the Firehouse, Lee Goldberg neatly balances conundrums and comedy in a dishy, informal, treat-the-reader-as-confidant style. The novel is far from the greatest detective story ever written, but fans of the TV series will probably enjoy it, and those who read it without ever having seen broadcast episodes may become regular viewers.


Derringer Award-winner Barry Ergang’s most recent book, THE BOY WHO ATE RAINBOWS, is available at Amazon and Smashwords, along with other stories and collections.

If you told me that Monk would've been a success before he was, I'd said it could never have happened. We never know what the public is going to like, so if we have an idea, why not try it? Mr. Monk became almost a fade. Everyone knew the character and he had most people's attention. He turned out to be one unusual, maybe annoying, but quite popular character.

That he did. I never read the books, but did watch some of the television show. I did not really care for it as it hit a little too close to home for me.