As Extreme Prey, the 26th novel in the series by John Sandford begins, Lucas Davenport is working on his cabin in Wisconsin. It is August and with the help of the carpenter the room should be finished weeks before winter sets in. His days are now his having left Minnesota’s Bureau of Criminal Apprehension. He is without a job and to hear others who know him tell it, he is driving everyone around him crazy. They need him back to work doing what he does best—hunting down bad folks. 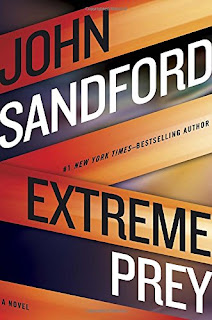 Minnesota’s governor, Elmer Henderson, always liked Lucas and especially liked having somebody who was no nonsense and got tricky jobs done. These days the governor is on the campaign trail down in Iowa as he seeks the number two spot on the democratic ticket for President. Through Neil Mitford, the governor’s “chief weasel” as Lucas thinks of him, the governor has asked Lucas to come to Ames, Iowa for a meeting.

That meeting is about a couple of recent incidents during the campaign. Incidents that make Governor Henderson think someone or a group of people might be targeting an opponent to eliminate her from the race. Henderson passed on his suspicions to the other campaign. They seem to think Henderson is working some ply to get their candidate out of the race if not the state.  Contrary to what they think, Henderson needs that candidate to stay in to have a chance of being a VP nominee. Beyond the politics of it all, Henderson is afraid these folks represent a major threat and wants Lucas to check on them.

While Lucas does not work for the BCA anymore, he still has his contacts inside and outside of law enforcement. It doesn’t take him long to determine there is something going on. The thrill of the hunt is what Lucas lives for and always has. He does not play politics. If he has to tick folks off to save lives he will and soon does.

Extreme Prey follows the style of recent novels in this long running series. From the first chapter readers know who the bad guys are. The read shifts from following them to Lucas to numerous other characters as the storylines gradually work closer and closer to each other for the climatic conclusion and aftermath. A thriller style novel from start to finish the focus is on the chase and Extreme Prey delivers from start to finish

For another take on the book make sure you read Lesa Holstine’s review written last month because she got the book direct from the publisher. Some of us are not so special and have to wait for the library. Lesa continues to refuse to adopt me and my family, but I have hope of wearing her down and living in her book closet.

Excellent review! I always enjoy reading John Sanford's thrillers as does my husband.

It is also fun to go read the way off base negative reviews over on Amazon.

Haven't read any of the Amazon reviews, but I'll read ANYTHING Sandford writes. Love Lucas, love Virgil Flowers. And loved Extreme Prey. Tight, suspenseful and when the bad guys panic and begin wide-ranging killing...Lucas in is his element.

I always look at a few reviews on a book after I have written mine just to see if I missed something glaringly obvious. The one star and two star reviews on this one are interesting and often amusing reading.

Sandford is one of the authors we "take" with us when we're on a long drive. We have several of his books on CD - he never seems to miss.

I'm looking forward to "reading" this one.