As Come Dark: The Posadas County Mysteries by Steven F. Havill opens the massive astronomy theme park known as Nightzone  is taking shape atop the mesa approximately 35 miles to the west of  Posadas, New Mexico. The dish is up, the technicians are installing everything, and slowly all the 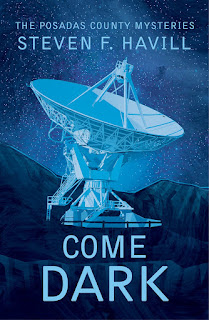 details are being handled.  Paying visitors are not on the grounds yet, but a media day to publicize the latest progress is just hours away so this little county in the along the Mexican border pretty busy.

Not only is Nightzone coming right along, but the girls soccer team is on one heck of a win streak and has a championship in sight. Media is present to chronicle history as the team seems unbeatable right now.  Way more media than normal means there are plenty of outsiders to contemplate the graffiti vandalism adorning one of the narrow gauge railway passenger cars that are to move folks up to the tramway location for the eventual ride to the mesa summit and Nightzone.

Hiding the railcar away from prying eyes will be easy. Undersheriff Estelle Reyes Guzman and the other officers will figure out who did it and why. That case will have to wait as a couple more serious crimes have occurred in quick succession. One of which is the fact that the girls volleyball coach has been found dead on the shower floor in the girls locker room at the High School. Shot four times Coach Clint Scott is definitely dead and has been dead for quite some time it would appear. Though the time of death might be a bit hard to tell since his body was found partially covered by the cascading waters of the cold shower head thanks to the fact that his dead body blocked the shower drain.

A murder, vandalism, a missing mother, and quite a lot more is going on in Come Dark by Steven F. Havill. This is one of those series where the primary and secondary characters actually age and evolve as time passes and the events of previous books impact current events and lives. This series has always been very good and nothing has changed with the latest installment. Come Dark: The Posadas County Mysteries from its distinctive cover to the last page is a complex police procedural style mystery and one heck of a read.

I also very much want to thank the wonderful Lesa Holstine who recently reviewed this book and thus alerted me to its existence. It is not the first time she has done so and I am sure it will not be the last.

I also like the way the characters mature, and the concentration shifting among them for the different books. Nice review!

Went hunting for your review and can't find it. Share the link, please!

I just love this series, and I know you do too. One of the most under appreciated series out there, and one of my favorite.

Kevin, I wrote it and turned it in, but it's not published yet. Next issue, I hope.