Recently I blew the dust off of my 2009 review of Small Crimes for Friday’s Forgotten Books because there was news on the movie. This week I thought I would blow the dust off another review of a work by David Zeltserman. The one below comes your way from May 2007 when hardly anybody was reading this blog. For the rest of your reading suggestions for this first Friday in June 2016 head on over to Patti Abbott’s blog. Come on back here for North Texas storm updates and more…

In the interests of fair disclosure it should be known that I consider David Zeltserman a good friend. Beyond providing a consoling e-mail from time to time concerning my Texas Rangers (the baseball team) David had me working for him a few years ago. For a number of issues of Hardluck, I did book reviews and interviews of authors as well as some fiction. Well, the fiction never was accepted but everything else was. A decent batting average all things considered. 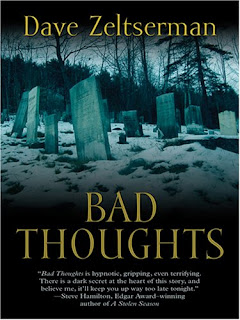 It is early November, 1997 as this complex and intriguing novel opens Billy Shannon awakens from a nightmare. His fingers on his right hand, the two that were mangled so badly nearly 20 years ago, are pulsing with pain while the rest of him is covered in sweat. The clock is ticking on another nightmare season and for Billy the bad news is that it is starting earlier this time.

As the anniversary of his mother's murder approaches, Billy Shannon continues as best as he can to work his job as a police officer at the Cambridge Central Square police Station. While his wife works in a law office in South Boston as a legal secretary Billy works homicide. Cases that begin to appear more and more like the way his mother died all those years ago.

The weeks pass and as the bodies begin to stack up the nightmares increase. What begins as a police procedural read turns into a psychological thriller bordering on a horror novel. Billy Shannon's world begins to unravel and readers are taken on a roller coaster ride through the increasing wreckage of his life. Not only is his mental stability at question, his very survivability as a human being is at stake in a conclusion that packs a powerful punch.

While some have compared it to Darkly Dreaming Dexter such comparisons are not applicable. A key component of Darkly Dreaming Dexter is humor and that novel pushes humor throughout the work. Dave Zeltserman's book hardly has a trace of humor. The basic theme of Darkly Dreaming Dexter is that some folks do need to be removed because they are a threat to society. That threat is uncontrollable and as such, since he has to kill anyway, he should use his twisted needs in a way to do the world good and kill those folks. That also isn't the case here. I could go on, but the point is clear.

This book is an often graphic and intense read that delves deep into the psychology of evil and sanity. It isn't lighthearted in any way as it deals with evil at a base level. At the same time, the author never forgets there is a mystery driving events and makes sure to keep the reader pulled y into solving the crimes. The result is a very good read from disturbing start to disturbing finish.

I received an ARC of this book in exchange for my objective review.

Haven't read any Dave Zeltserman in ages. High time I returned, and Bad Thoughts sounds like a good place to do it.

That would work. I also very much like his Julius Katz stuff.