My review of Catch And Release: 17 Stories  by Lawrence Block from October 2013 is my offering for FFB today. I believe Patti Abbott has the links over on her blog. If not, or anything else is wrong, I will fix it later today once we are back home from Sandi’s appointment with her cancer doctor. 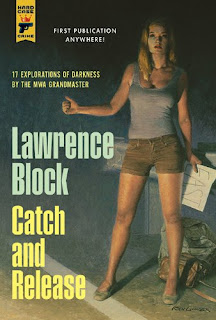 The latest book from author Lawrence Block titled Catch And Release: 17 Stories is an enjoyable grab bag of tales. Short tales, long tales, and a play are present here where those involved almost always offer a philosophy on life and their role in the world. As such, this is a thinking reader’s book and not a light weight read where the characters just run around shooting people and killing folks for the heck of it. Everything that happens, or does not happen, is because a character made a conscious decision based on his or her philosophy of life and his or her role in it and the word as a whole.

The book opens with “A Burglar’s-Eye View of Greed” where the narrator goes to see his favorite bookseller, Bernie Rhodenbarr.  Fortunately for Bernie he doesn’t have to sell books to survive. He very well may be the last of the gentlemen burglars.

All you want when you have had losing hands all night is “A Chance To Get Even.”  Richard Krale is having a bad night and wants his chance to finally settle up. Not just for the bad night of poker, but for other matters as well.

“A Vision in white” comes next and is a story that is nearly impossible to discuss at all without ruining it for the reader.  As you read it, the tale should make things abundantly clear where the inspiration came from in the sports world.

The signature story of the book “Catch and Release” (previously available as a solo short story confusing some readers) follows where the water is on not at all involved except a metaphorical level. He has his methods and his fantasies in a tale that plays with the reader right to the end.

Katherine “Kit” Tolliver had a mission when she arrived in Toledo, Ohio, in “Clean Slate.”   Like the main character of the proceeding story, Kit has a plan to balance things out.

In what has to be the most flat out disturbing story in the book (though “Catch and Release” comes close) hoarding is just part of the issue in “Dolly’s Trash and Treasure.”  It begins with a visit by child protective services and Mrs. Saugerties has some very strange answers.

Next is a one act play tilted “How Far.”  Dorothy Morgan has a problem and Billy may or may not help her. One doesn’t really know until the end.

The end of the TV show the Sopranos annoyed many of us.  It annoyed Mick Ballou as well.  In “Mick Ballou Looks at the Blank Screen” he ponders what was meant by that ending and more.  He’s doing all this thinking for a good reason.

As the years pass, the familiar often has to make way for something new. That idea is a small part of the tale “One Last Night at Grogan’s.” Mick Ballou, the major character of the proceeding tale, is the primary focus here as well in another good read.

Walters stole some very valuable information and Jondahl wants him stopped and the information retrieved in “Part of the Job.”  The history of the tale is almost as interesting and explained in the attached piece titled “The Story About The Story . . .”

Like several of the previous characters, the main character in “Scenarios” has twisted fantasies.  It ends where and when it ends.

An elderly man helps with an oral history project in “See the Woman.”  Doing so stirs up for more than just memories.

Numerous stories within the main story is the author technique at work in the next two long stories.  The backdrop is a poker game where a variety of characters from various walks of life discuss sins, philosophy, and much more in “Speaking of Greed” and “Speaking of Lust.”

Routine is important to Kramer in “Welcome to the Real World.”  Kramer likes things the way they are and isn’t ready to change. Yet a former coworker seems intent on helping Kramer change-- one way or another.

Colliard didn’t really want the coffee, but, he had to do something with his hands in “Who Knows Where It Goes.”  Life wasn’t supposed to work out this way, but it has, and the options are few.

“Without a Body” is the last story of the book and features a narrator where one isn’t sure if one is dead or alive.

Explanations of the various stories and their history are provided in “Story Notes.”  A short author bio and ads for other books bring the book to an end.

Catch And Release: 17 Stories features characters that over their philosophy on crime, life, and more. What happens, or does not happen,  in these tales is because the main character has made a conscious decision based on his or her philosophy of life and his or her role in it and the word as a whole. The tales are complicated with twists that make the reader pay attention and think. The book is also very good.

Material supplied by the author in exchange for my objective review. Print versions of the book are available from Subterranean Press and Hard Case Crime.

I bought CATCH AND RELEASE but haven't read it yet. Nice review!

This sounds great and I've heard of it somewhere else. I wish I had time to read more. Anything by Lawrence Block is good to me. Glad to see Bernie (Rhoden----however it's spelled)is included.

It's been soooooooooooooooo long since I've read any fiction by Block. This sounds like the perfect place to start remedying that omission.