Make sure  you check out the full list of reading suggestions today over at Patti Abbott's blog...

As The Janus Stone begins, Dr. Ruth Galloway, head of the forensic archelogy at the University of North Norfolk, is called to a dig site in the town of Norwich. A very large Victorian style house and accompanying grounds are being massively modified and rebuilt into seventy-five luxury apartments. Edward Spens, owner and builder, is moving fast on his project and won’t be happy that with any delay. That is too bad for him, as bones have been found which is why Dr. Galloway has been called to the site. 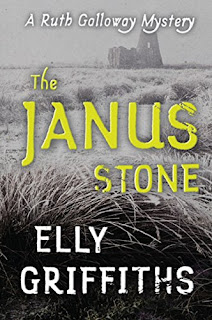 The bones, minus the skull, appear to be human and of a child. Since she can’t determine their age just by looking at the bones, it seems to best to contact the police. That means Detective Chief Inspector Harry Nelson and his team are soon onsite and working the case. Whether the bones come from the time of Romans ruling England or far more recently, is one of the many puzzles at work in The Janus Stone.

Following by just a few months after The Crossing Place both Nelson and Galloway are dealing with the events of the case. Those repercussions continue to play a role in their lives while they work the current case. Both characters continue to develop in this second book of the series, as do many of the secondary characters.

Even if one was unaware that there is a long running series, it would be clear from reading the books that author Elly Griffiths intended to continue building on the vast family of people and relationships that were established in The Crossing Places. While archeology and history have important roles in this book and series, they are secondary to the mystery itself as well as those relationships. Events have consequences and repercussions and those are present here in a major way for several characters as are the issues with the complicated new case. The result is another very good read in an intriguing series.

Like all really good series, this one must be read in order.

I like mysteries that have archaeologists in them. Not sure why. Probly a primal thing. Enjoyed your review, Kevin. Hope things are going well with the missus.

As do I. Years ago in the land before time of social media and all the rest of it, I was convinced not to pursue it as a career by a guidance counselor due to limited jobs and the math one would need for the job.

Hanging on...bit of a mixed bag news front, but more pluses than negatives right now. Thank you, sir.....on all aspects.

I enjoy this series very much. The relationships between the characters, plus the archeological aspect, appeal to me in this series, although I love mysteries for the puzzle element. Thanks for the review.