Archeologist Ruth Galloway lives alone in a small cottage on the edge of an area known as “the Saltmarsh.” It is a coastal land of desolation where the sky and sea meet. It is a treacherous and dangerous land of stark beauty and one that few people enjoy. She is far from her south London upbringing as well as her parents. Considering her observations about them distance is a very good thing.

When she isn’t at her small cottage with her cats she is at the University of North Norfolk where she teaches forensic archeology. It is there, thanks to her department chair Phil, she first meets Detective Chief Inspector Harry Nelson. The inspector wants her to inspect some bones that have been found out near the bird sanctuary in another part of the Saltmarsh. 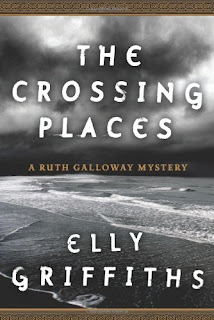 He hopes that the bones might be a missing child who vanished ten years ago. Her name was Lucy Downey. Since her disappearance a decade ago the inspector has been receiving strange letters from someone. A person who uses quotes from the Bible, Shakespeare, T. S. Eliot, and other sources to taunt the inspector with clues. If Ruth Galloway can verify that the bones are of the missing child, he might just have the first solid piece of evidence to advance the case.

What follows is a complex and highly atmospheric read as Ruth Galloway gets drawn deeper and deeper in the mystery of the Lucy Downey case. At the same time a bond begins between her and the inspector creating additional stress. It isn’t surprising when Ruth herself becomes a target as the case proceeds.

Character complexity is at work here from the beginning. In some senses Ruth is the classic clichéd spinster-- overweight, cats as her companions, no romantic interest, and a job that that fills her days. It is her observations on her parents, life, the world around her, and much more that fill the character with depth and meaning. The same is true to a lesser extent with the inspector though most of the book is told from watching Ruth.

The Crossing Places: A Ruth Galloway Mystery by Elly Griffiths is a solidly good start to what could be a very intriguing series. At least in this book, history, archaeology, and more take prominent roles resulting in the subtle education of the reader as the pages move by. A mystery that encourages the reader to think while also quietly teaching is a book that is very much worth reading.

Just noticed your message on DorothyL about your reviews of Elly Griffins' series. So glad you discovered this series, which I also enjoy and agree it must be read in sequence. Sometimes Ruth makes me crazy but I find the books absorbing.

Very much enjoy them. I am up to book four and I think she needs some professional help. :)