Review: Murder On The Aisle by Ed Gorman (Reviewed by Barry Ergang)

Barry’s review below is just a small part of the bigger celebration and honor of Ed Gorman today. Make sure you head over to Patti Abbott’s blog where there will be many more in honor him.

Tobin is a short man—five-foot-five—with a far from admirable past and an even shorter temper at times. His stature, among other traits,  has been known to get him into trouble, as it already has when the novel opens. He’s trying to dodge the newspaper reporters and columnists camped out in front of Emory Communications, the company that syndicates Peeps, the movie review program on which he co-stars with his former college roommate and former best friend, Richard Dunphy. Why? Among a number of other reasons, at the night before, at a trendy restaurant, Tobin slugged Dunphy. 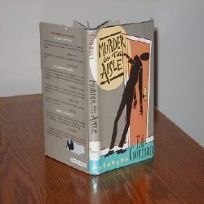 Dunphy’s contract with the broadcaster expires after tonight’s program, and rumor has it that he’s thinking about not re-signing. If he doesn’t renew, Tobin could be out of work.

Peeps is notable as “the only movie-review TV show with a live audience,” an audience frequently full of film students, among whom some are able to respond to the two critics during the program’s final segment. “Sometimes the result resembled a brawl.” A vehement disagreement about a film erupts into an actual brawl between Tobin and Dunphy during the taping of the latest show, requiring stagehands to pull the two apart—but not until they’ve inflicted noticeable damage on one another.

When, a little later on, Dunphy knocks on Tobin’s dressing room door and, upon being admitted, falls into Tobin’s arms, a knife sticking out of his back, Tobin becomes the prime suspect in the investigation being conducted by no-nonsense NYPD Detective Huggins, who “reminded him of Frog Face McGraw, the eighth grade’s most notorious bully.” As far as Huggins and others are concerned, Tobin has more murderous motives than anyone else connected to Dunphy, but as Huggins explains when Tobin asks if he’s going to be arrested, “You’ve got a newspaper column and you’ve got a TV show. And you’ve got a lot of friends. So you’re not on your way to the lockup, are you?” 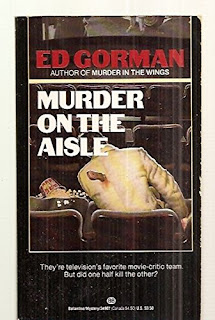 “But that doesn’t mean that you won’t be real soon now, Mr. Tobin.”

“I didn’t kill him,” Tobin says repeatedly, but Huggins isn’t buying it. Thus, in a familiar murder-mystery manner, Tobin sets out to find the real killer himself. In the process, he encounters a variety of people he’s dealt with before and others he encounters for the first time. Some seem harmless, others seem—or are—genuinely dangerous, and still others reveal things to him about his late partner that he didn’t know. He also gains some insights into himself, painful though they often are.

Lest I ruin others’ enjoyment, I won’t reveal much more about this brief, quick read of a whodunit beyond that it’s very amusing and loaded with wry commentary about popular music, film, TV, and some of the celebrities therein, and that it’s threaded with mordant humor that spurs its pace. For instance: “He was halfway to the bathroom (he was planning on removing his liver and taking it downstairs to the laundry room and putting it in the drier) when the living-room phone rang.” There are also some semi-serious, semi-humorous descriptive moments: “He stood there as if frozen—feeling at the moment completely isolated from the rest of humanity (no man is an island but some are peninsulas)….”

Murder on the Aisle is a long way from a literary masterpiece, but it’s a fast entertaining novel likely to provide good reading to mystery fans who like amateur detective stories with hard-edges melded with some comedic moments.

Caveat: though it doesn’t abound, there is some raw language in this novel.