Barry is back today taking a look at several mysteries featuring Don Diavolo and a cast of supporting characters. Make sure you check out the full list of reading suggestions on Patti Abbott’s blog for Friday’s Forgotten Books as well as a lot of other cool stuff.

Author, editor, and amateur magician Clayton Rawson is best remembered as the creator of The Great Merlini, a magician who had a knack for solving seemingly impossible crimes. Under the pseudonym Stuart Towne, Rawson created Don Diavolo, a magician/escape artist/ventriloquist who was billed as “the Scarlet Wizard” for his bright red on-stage evening clothes. Diavolo appeared in four short novel-length tales which appeared in Red Star Mystery, a short-lived pulp fiction magazine from 1940, and tended—like Merlini (who’s alluded to in one of the novels)—to get involved in a variety of impossible crime situations.

Diavolo has his own cast of supporting players. These include reporter/columnist for the New York Press J. Haywood (“Woody”) Haines, Jr.; Karl Hartz, the engineer of Don’s stage illusions; Patricia Collins and her twin sister Mickey, Don’s on-stage assistants; the gambler of many aliases most often referred to as the Horseshoe Kid; and the Oxford-educated Chan Chandar Manchu, “Don’s dresser, chef, and general handyman.” Sure that only an illusionist of Diavolo’s caliber could pull them off, Homicide Squad’s Inspector Church regularly hopes to nail the magician for murders he cannot solve himself, despite Don’s ability to prove his innocence by explaining the who and how of the crimes.

The titles under consideration here are Death Out of Thin Air and Death From Nowhere, both available from MysteriousPress.com. Each volume contains two titles, the premises of which I’ll try to keep brief and moderately oblique rather than spoil readers’ fun.

Death Out of Thin Air opens with “Ghost of the Undead,” which deals with a murderous cloaked figure whose “face, if it could be called that, was black, and its features were unutterably grotesque and hideous. White pointed teeth gleamed between the bestial lips. The Thing had the face of a bat!” 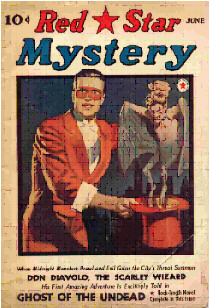 What ensue are impossible murders and disappearances, impossible thefts of thirty thousand dollars in negotiable securities and half a million in diamonds, and the deadly appearances of the vampiric ghost of Gilles de Rais.

In the eponymous “Death Out of Thin Air,” Sergeant Lester Healy, working undercover, has witnessed the impossible: the vanishing of the lethal entity who came to be known as The Invisible Man: “Healy, you see, had under the bright lights, just watched a man vanish into thin air. He had seen him fade slowly and completely into nothing at all…He had been faced with clearly unmistakable evidence that the man who disappeared was still there under those bright lights—still there but quite invisible.” 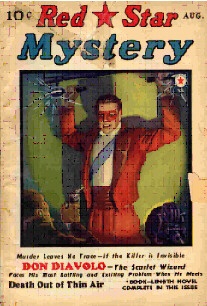 Shortly after reporting back to Centre Street Headquarters, Healy is murdered by an invisible killer: someone who is brazen enough to kill one of their own and then challenge the police department to prevent a theft he intends to commit under their very noses. Don Diavolo becomes involved when multi-millionaire financier J.D. Belmont engages him to protect his prized possession, a diamond necklace that belonged to Marie Antoinette. When the invisible man succeeds in stealing it despite elaborate precautions, Diavolo determines to recover it—putting his own life at risk in the process—unmask the killer, and figure out how he effected his crimes and the invisibility.

The first story in Death From Nowhere is“Claws of Satan,” which has Diavolo paying a visit to the offices of circus co-owner and generally unscrupulous businessman R.J. Hagenbaugh after the latter has stopped payment on a check for an illusion Diavolo sold him in good faith. When he arrives and Hagenbaugh’s attractive blonde secretary denies him admittance to her boss’s inner sanctum on the grounds that he’s in conference and doesn’t want any interruptions, Diavolo uses his ventriloquial skills to deceive her and gain admittance. When he does, he barely glimpses Hagenbaugh slightly 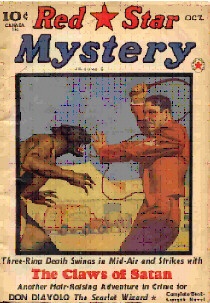 slumped in his desk chair before he’s blackjacked by someone behind the door. From the time he awakes, he is, as far as Inspector Church is concerned, the prime suspect in the case. To acquit himself, Don must stay one step ahead of the police and solve a series of impossible murders the police are sure only he could have committed.

“The Enchanted Dagger” begins with the arrival in New York of a furtive individual who checks into a hotel after taking steps to conceal his identity, who then phones the unavailable Don Diavolo, and then not long after is attacked by a gun- and knife-wielding assailant. The problem for the police? Plenty of blood but no body to explain its presence. 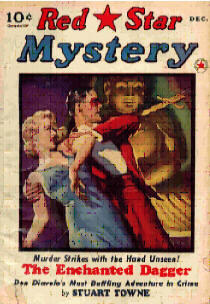 What brings Diavolo into the predicament is an ongoing challenge from the wealthy Nicholas Sayre, whose hobby in retirement has become the occult in both the spiritual and collectible realms. He’s not fond of Diavolo because the magician once exposed a con artist to whom Sayre had made a sizable donation. Now “nothing would give him any greater pleasure than to make Don Diavolo admit, once and for all, that occult phenomena did exist which could not be duplicated by trickery and sleight of hand.” Diavolo once told Sayre he’d pay ten thousand dollars to anyone “who could produce a psychic manifestation I couldn’t duplicate by ordinary means.” Sayre contends he’s found one, a mystic named Shivara who can—and does—vanish before multiple viewers’ eyes, one pair of which is Don’s. Ultimately, Diavolo must solve a number of impossible situations, including murders, Shivara’s several psychic skills, and how an ancient treasure figures into modern events, as well as keeping himself from getting killed.

The Don Diavolo mysteries, are fast-paced short novels which combine cerebral conundrums with the kind of fast-paced physical action (and occasional hokeyness) the pulps were known for.

There are (fortunately only) a few instances of offensive racial epithets readers must put into the context of the era in which these short novels were written. As far as I can determine, physical editions of these tales are no longer available. As mentioned earlier, I read them in the electronic editions from Mysterious Press/Open Road Integrated Media, which companies need to hire a competent proofreader. The novels contain their share of missing or incorrect punctuations, as well as occasional misspellings. The worst instance of misspelling occurs in “The Claws of Satan,” when the skin condition vitiligo is written vitiglio. Readers unfamiliar with this condition, and unable to find a definition of the misspelled word, might think the author has made it up.

With those caveats noted, I can and do recommend these as good entertainment.

Derringer Award-winner Barry Ergang’s impossible crime novelette, “The Play of Light and Shadow,” is available at Amazon and Smashwords, along with some of his other works.