In the wreckage of the S&L crisis of the late 80s and early 90s, Ed Earl Burch works as a private detective. His office located near Mockingbird and Central in Dallas is in a shabby office park with a view of the time and temp sign over at the Dr. Pepper Plant. It features the noise of the traffic, an air conditioner that wheezes and does not cool, and a man with a serious thirst for alcohol.

Ed Earl Burch is hanging on as best as he can. He has made a few bucks thanks to the scavengers that have come to feats on the remains of the S&L crash as well as former business partners looking for their partner or bank officers looking for the developer that just vanished. He has connections all over town and beyond dating back to his days with the Dallas PD. That fact, as well as his low overhead in an increasingly vacant building, has helped him survive.

About ten blocks away is a small Mexican joint on Ross. Owned by Arturo Garcia, the place known to everyone as “Café Garcia” is always open to Ed Earl Burch. Bringing home the pregnant teenage daughter of Arturo Garcia means there is always a plate of food and a beer for Burch. It has been that way for quite some time so it means it is one of several locations that Burch can be predictably found.

The woman with the gun who interrupts his late dinner has other plans. After dropping a name from the past, at gunpoint she escorts him out to her car. Before very long, they are north of Dallas, up in Grayson Country, and on the land of a man who has left the life of crime behind for the life as a gentlemen rancher. Appearances, if one ignored the gun toting guards scattered everywhere, could be deceiving. 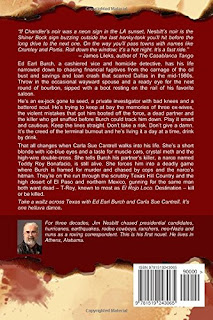 Burch knows exactly what Norville Ross is and could have done without the jaunt down memory lane. But, Ross wanted him here and made sure he was brought in as safely and as quickly as possible. Coming himself was not an option. The woman’s name is Carla Sue. Ross sent her to bring back Burch so that he could discuss with him a business proposition that each could find mutually satisfactory.


If any of them can say alive long enough to seal the deal.
The Last Second Chance: An Ed Earl Burch Novel  by Jim Nesbitt is a violent crime fiction ride across Texas. Written in a noir style it features a read where the language is coarse, the sexual situations are graphic, and bullets and blood are on nearly every page. Burch takes no prisoners and will unleash hell on those who come after him and those he cares about.


Along the way, there will be heavy toll in carnage and death with plenty of ghosts of the past to keep him company in quite moments.  Author Jim Nesbitt is building the bottom floor of a series with The Last Second Chance: An Ed Earl Burch Novel. A novel that packs quite the punch and is highly recommended.

According to Amazon, I picked this up in the middle of last November. I don’t know now if I took advantage of a free read promotion or used funds in my Amazon Associate account. Either way, I did it after a publicist contacted me about reviewing the second book in the series, The Right Wrong Number. A paperback copy of that read is in my TBR pile.