A Dead Liberty by Catherine Aird (Collins, 1986) is the 12th book in the long-running British detective series featuring Inspector Christopher Dennis Sloan of the fictional Berebury CID department in West Calleshire, England. Known as “C.D.” which invariably is pronounced “Seedy”, Sloan is generally accompanied by a clueless constable named Crosby. Sloan reports to Superintendent Leeyes, who is irritable and often demanding. He frequents the local Adult Education classes and is prone to quoting odd bits of information from the latest class that may or may not be relevant to the subject at hand. 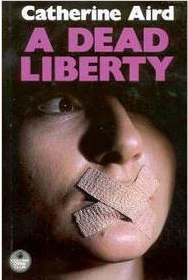 In this outing what should have been an open-and-shut case turned out to be anything but. Lucy Durmast was accused of poisoning an employee of her father’s. He had just become engaged to his hometown girlfriend and jealousy was thought to be the motive for the murder. The meal she prepared for him was the only food he’d taken that day that wasn’t shared with others, making her the obvious and sole suspect. The first indication that things would not go as expected was when Lucy refused to speak at her arrest and interrogation. She declined to talk when the judge asked for her plea, and she wouldn’t say a word when she was consequently imprisoned for contempt of court. She politely listened to everything said to her but she would not respond. This extraordinary behavior puzzled and worried everyone, including her friends, the police, the prosecutor, and the judge.

Then the original investigating officer was injured in an accident and Inspector Sloan was assigned to wrap the case up for the prosecutor to present at trial. When the college friend of the victim disappeared and another person known to the accused was killed, Inspector Sloan started from the beginning and conducted a brand-new investigation to get to the bottom of a situation that everyone was beginning to see was not what it appeared to be.

Catherine Aird, who won the Crime Writers’ Association Diamond Dagger Award in 2015, has been on my TBR list for years. Through Open Media’s Early Bird Books list of discounted Kindle titles I acquired three that I read in short order. While observing the conventions of the classic British detective story, Aird delivers original characters and innovative plots via immensely readable narratives.  I did not guess the perpetrator or the motive in any of the three, which is always a plus for me. These books are not long, they seem to run less than 250 pages, an advantage for anyone who binge reads and a big change from the current tendency toward doorstopper tomes. I am looking forward to finding the rest of the books in the series and reading them as fast as possible.

The only work Ive read of Aird's is His Burial Too. It's been years since I did, so at this remove I remember nothing about it beyond the fact that it's a locked-room mystery. I do remember enjoying it.

I have never read any.

She's one of my favorites too - and, as far as I know, still writing. I have never understood why she's not more popular, at least among lovers of the traditional mystery - her books are sort of a cross between traditional puzzle-plots and the police procedural.