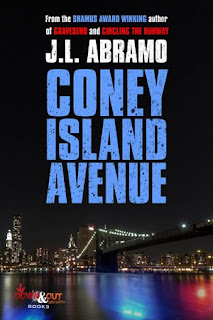 Bill Heller had the feeling he was being followed as he drove in New York City as Coney Island Avenue by J. L. Abramo begins. He parked and went into a local restaurant to have some food and to see if his suspicion was correct. He was being followed and he knew he was in real trouble. The restaurant also gave him the opportunity to hide what he was carrying.

One of Bill Heller’s final acts will have huge repercussions for Vincent Salerno, a bus boy at the restaurant, who at first has no idea what he is carrying or how far those who want it back will go. For the officers and detectives of the 61st precinct located on Coney Island Avenue in New York, the subsequent murders will have huge ramifications professionally and personally. Like ripples in a pond, that first case will spiral out in coming weeks to trigger more carnage with more connected cases, as they go about their daily lives as well as other police work. 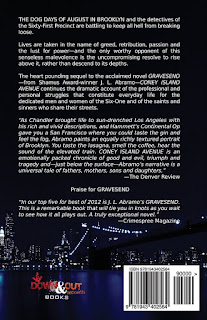 A follow up to his first novel of the 61st titled Gravesend, J. L. Abramo keeps the action moving by way of short paragraphs, rapid-fire dialogue, and constant shifts in the storyline. A number of distinct secondary plot lines are in play throughout the read thanks to a whopping 58 characters. The character list at the front of the book makes it clear that the author has a lot going on in the read as these characters run the gamut of crime, police, and average citizen types. Somehow, the author manages to make them all stand out from each other.

As a police procedural, the read works well detailing not only police work, but how events and cases affect the officers and detectives at home in their personal lives. Very reminiscent of Ed Mcbain’s 87th Precinct Series, the read also reminds this reviewer of the legendary Hill Street Blues television series. In both cases, tragedy can strike in a blink of an eye and the repercussions take a toll on all involved.

Coney Island Avenue by J. L. Abramo is not a book for all readers. Graphic language is present as is a dark sense of humor. While it is a police procedural, it is not a sanitized one. This is crime fiction and all that entails. It is also a very good read.

I received this months ago from the publisher in exchange for my objective review.