Review: Dead, To Begin With: A Dan Rhodes Mystery by Bill Crider

After a problem at the nearby beauty shop resolved, Sheriff Dan Rhodes learns of a far more serious problem as Dead, To Begin With begins. Jake Marley has been found dead on the stage at the Clearview Opera House. The building dates back to the oil boom days in the early 1900s and, like the rest of the former bustling downtown area, has seen hard times and disrepair. That was going to change thanks to Jake Marley. 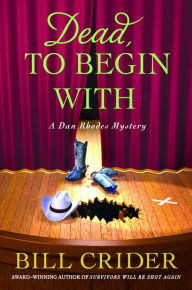 Grandson of one of the local men that had gotten very rich during the oil boom all those decades ago, Jake Marley suddenly took an interest in the Clearview Opera House. Known as an eccentric recluse for years, he lived a life of isolation until he suddenly bought the place and started renovations. Suddenly, he was active in the community and that was a good thing, as his money would really help the town of Clearview and the surrounding area. Nobody wanted to ask him about his reasons or his plans as just about everybody was afraid he would change his mind and take his money away. All anyone has known these past few weeks is that he planned to restore the opera house to its full glory and establish some kind of community theater. The theater’s first performance was to be some sort of Texas based vision of the classic, A Christmas Carol.

What the death of Jake Marley means for the local economy is one thing and not something that Sheriff Rhodes can do anything about at all. Mr. Marley is very much dead and Sheriff Rhodes can’t change that either. What concerns Sheriff Rhodes is the fact that there are some signs that Mr. Marley had some help shuffling off this mortal coil.

Found by real estate agent Aubrey Hamilton, who had been summoned to a meeting by the deceased, she doesn’t know what happened or why he wanted her to come by this morning. She assumed it was a real estate issue of some type considering the nature of their business relationship. While the Sheriff has heard rumors about Jake and Aubrey, she denies all of it. According to her, beyond the age difference between the two of them that would be a huge hindrance, they were not even friends, and only had a business relationship.

Maybe he did just fall from the overhead grid deck above the stage. That obviously could have happened. However, if he did that, it would not explain every detail of the scene. Seepy Benton may believe the theater is haunted, but Rhodes does not think supernatural forces were involved either. Sheriff Rhodes has plenty of questions as his investigation begins in Dead, To Begin With.

The latest in the long running series featuring Sheriff Dan Rhodes and a host of characters is another good one. As usual, the secondary characters, the humor, the observations of small town life in Texas, are just part of an overarching mystery. Dead, To Begin With first and foremost is another solidly good mystery filled with plenty of misdirection, intrigue, and a few clues. Another very good read by Bill Crider who simply can’t write a weak book. If it isn’t already clear, Dead, To Begin With is a highly recommended read.

ARC was provided by the author in exchange for an objective review.