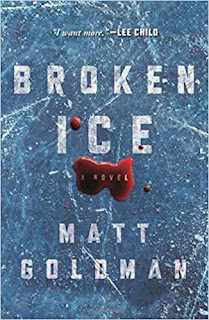 Broken Ice by Matt Goldman (Forge Books, 2018) is the second book about Nils Shapiro, a former police officer who has joined forces with former police colleague Anders Ellegaard to establish a private detective agency in Minneapolis. Anders brings business sense and marketing know-how to the partnership, and Nils contributes investigative skills and acute intuition. They are both fully realized characters; of the two, I liked Anders more. He is at a loss sometimes as to the moral ambiguity of the situations to which their work leads him. Nils, on the other hand, isn’t especially troubled by such considerations.

Two teenage girls are missing from the area and Nils is retained to find one of them, Linnea Engstrom. The two girls aren’t particular friends but the connection between the two events is unmistakable. While interviewing Linnea’s parents, the other girl is found dead in the St. Paul caves. Feeling increasing pressure to find Linnea quickly, Nils and Anders go to the scene to learn whatever they can that might apply to their search. Standing outside the cave entrance talking to the police, Nils is hit in the shoulder by an arrow. Not just any arrow, but one meant for big game hunting, with lethal razorlike edges. The medical examiner was leaving the cave as he fell and took prompt action to keep him from bleeding to death.

Nils arranges to leave the hospital with a full-time nurse, whom he escapes as soon as possible to continue his investigation, which takes him to a small town near the Canadian border known as the Hockey Capital of the World. Playoff season is in full swing and many of Linnea’s friends are there. Two more people connected to Linnea turn up gruesomely dead, and Nils is constantly on the look-out for the archer to come back to finish him off while he conducts interviews and visits Linnea’s known hangouts.

New information about halfway through suggests a different motive for Linnea’s disappearance than earlier assumed and leads Nils into Canada with an interesting pair of travelling companions. The supporting cast of characters in this book is one of its strong points.

This new series is a pleasant addition to the catalog of fictitious private investigators in general and to the Minnesota collection in particular. (Why is Minnesota so saturated with crime fiction? We don’t hear anything about private investigators in Idaho.) I noticed three or four jarring typos in the book. “Grilled leaks” instead of leeks and “Char road shotgun” instead of rode for instance. Someone used spellcheck instead of an actual proofreader. I expect better from a prominent publisher like Forge.