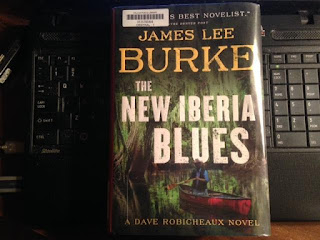 As The New Iberia Blues: A Dave Robicheaux Novel begins, it has been 25 years since Dave Robicheaux last saw Desmond Cormier in New Orleans. Born of mixed race and in serious poverty, Cormier is a classic story of somebody who rose above his lot in life through hard work and sheer determination. He was a sidewalk artist when Robicheaux last saw him on a cold and gray January morning. Cormier told him he was headed to Hollywood and would be a film director.

He came back home twenty-five years later as an award nominated and award winning director and now lives part time in a house on stilts out at Cypremort Point. A known eccentric who does not fit the expectations of anyone, he gets in trouble and makes the news for his behavior and comments. On this particular August afternoon, Detective Dave Robicheaux and Deputy Sean McClain are at Cormier’s home because distant neighbors have called 9111 and reported hearing a woman screaming somewhere nearby. The officers who first came out earlier that morning found nothing, but Detective Robicheaux is checking again as far too many people reported the same thing for it to be nothing.

The tennis shoe, size 7, might be nothing or it might be proof that a woman had been on the beach at some point in the recent hours as the shoe is in fairly good condition. The location of the shoe means that the person wearing it was probably within yelling distance of Cormier’s house.

A visit to the house reveals Desmond Cormier is at home along with his friend,  Antoine Butterworth. Mr. Butterworth is a unique individual. One of those types that Robicheaux has met over the years and knows from the get go he should be dropped in a vat of bleach and left to dissolve and go away. An awkward conversation begins until Cormier suggests that Robicheaux should look through the telescope out at the bay.

Robicheaux does and sees a number of different things. That includes something that seems more a hallucination or a vision than anything grounded in substance. Yet, though Cormier and Butterworth deny seeing the body, Robicheaux is sure he saw a young, African American woman, wearing a purple dress, floating out there in the Bay while affixed to some sort of cross.

McClain sees her too and thinks the cross is stranded out on a sandbar. Just after 10:30 that night they find her by way of a department rescue boat and retrieve her from her watery fate. That body of the young woman is the first they recover, but it won’t be the last by far in The New Iberia Blues: A Dave Robicheaux Novel by James Lee Burke.

A James Lee Burke novel is always a complicated read full of mystery, history, and legacy. Such is the case here where numerous references to Robicheaux’s past especially in terms of being a widower twice, the past of Louisiana, the past of America, etc. are made again and again. Significant portions of the book are aimed at the ongoing and systematic degradation of our institutions by the current administration as well as the degradation of the environment of Louisiana caused by ongoing climate change and other factors that are destroying the wetlands and coastal areas of the state.  As a result, significant portions of the book are a lament of the present and an ode to decades ago that now seem to be far more simpler times.

At the heart of The New Iberia Blues, the cross and the deceased woman is the main mystery. Who killed the woman? Why was she affixed to the cross? Both questions take on highlighted urgency as additional bodies fall becuase a killer kills and kills again. The pressure of the case is ramped up considerably when both Robicheaux’s longtime friend and former police partner, Clete Purcell, as well as his daughter, Alafair, are drawn into the case by very different ways. One knows that it most likely will be settled by the Clete and Robicheaux doing what they do best regardless of the legalities. Sometimes you really do need to kill all the bad guys no matter the legalities of the matter.

The New Iberia Blues is the latest powerful and compelling novel by James Lee Burke. Those who prefer fast moving books that feature very little or no scenic descriptions are again advised to look elsewhere. Author James Lee Burke is well known for his ability to create detailed visual images of the environment around characters and does so splendidly again in this read. Those who argue that authors should ignore the corrosive effects of the current administration on politics and more should also avoid this book as the author pulls no punches and makes it clear what his characters think about our country today.

Those who like a very complicated mystery that is rich with detail will find much to like in The New Iberia Blues: A Dave Robicheaux Novel by James Lee Burke. It is a very reflective read that praises aspects of the past, confronts the future, and provides a mystery that defies easy answers or expectations. In short, it is a good one.