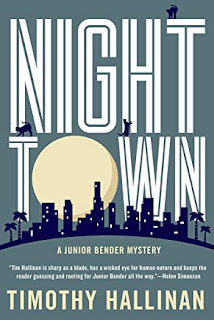 Nighttown by Timothy Hallinan (Soho Crime, 2018) is the latest in the adventures of Junior Bender, an enchanting burglar in Los Angeles. He would truly like not to be on the wrong side of the law but theft is so much more lucrative, not to mention fun, than a regular job. What is he to do?

In this particular caper he’s offered a ridiculously large sum of money to steal an old doll from an empty house that is due to be razed any day. The offer comes from a badly disguised woman in an orange wig in a McDonald’s who goes to the trouble of hiring three child actors to pose as her children for the short trip into the restaurant. He knows something is deeply wrong with the set-up. Normally he would run, not walk, away from it, but he is desperate to raise enough money to kidnap his girlfriend’s son from her controlling ex-husband. Good help doesn’t come cheap.

He takes extra care to case the empty house and learns that someone else has been hired to steal the doll or whatever is hidden in it. The second burglar ends up dead; knowing it could have just as easily been him, Junior is more motivated than ever to learn the identity of the originator of the strange request and why he or she is interested enough in the doll to pay so much for it.

As usual in this series, the characters teeter on the fine line between droll and terrifying. In Junior’s line of work he encounters a lot of folks most of us would not run into, nor would we want to. The last occupant of the empty house, the Marfan sufferer who keeps stuffed cats in her house, the aging and ill crime boss who finds new zest in life after he takes out one of his competitors, hair-raising but sad, every one of them. I wanted to laugh at them but I was too afraid of them to do so. I particularly liked the hitwoman Junior hires to protect his ex-wife and daughter after he receives death threats. The part where the hitwoman joins the ex-wife, the daughter, and her friends for a sleepover complete with a rousing game of charades is as delightful as it is unexpected.

Not surprisingly, Publishers Weekly gave this book a starred review. If you are not acquainted with Junior, this is a good place to begin.