Barry Ergang Reviews: ONLY TO SLEEP: A Philip Marlowe Novel (2018) by Lawrence Osborne

ONLY TO SLEEP: A Philip Marlowe Novel (2018) by Lawrence Osborne 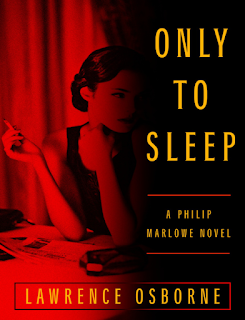 The time of the story is 1988 and its first-person narrator is a seventy-two-year-old retired private investigator living in a house he bought in 1984 “a few miles north of Ensenada in Baja.” His name happens to be—at least for the sake of the book and this review, if not necessarily by recognized literary standards—Philip Marlowe. The extremely flimsy plot consists of the elderly detective being hired by a pair of representatives from the Pacific Mutual insurance company to look into the drowning death of the supposedly well-to-do—but “profligate” and thus bankrupt and corrupt—seventy-two-year-old real estate developer Donald Zinn, sometimes referred to as “El Donaldo.” (Does Zinn remind anyone of a real-life personage of dubious character who is [unfortunately] active at the time of this review? Did Lawrence Osborne intend it? If yes, it’s one positive I can cite.)

The retiree agrees to the job. What ensues, far from being the kind of hardboiled detective story one might reasonably expect, reads more like a travelogue of Mexico and many of its lesser-known cities, towns and locales, as the detective trails the Zinns hither and thither throughout the country, in the process meeting and becoming smitten with the thirtyish and very attractive Dolores Araya Zinn. His travels result in relatively little more than encountering a somewhat menacing character who likes to spin tops on the bars or tables he’s seated at, and an eventual violent tangle with same. No worries, though, because as he explains early on: “I also carried the cane that has been my constant servant since I broke a foot in 1977, and inside which slept a Japanese blade that a master smith had custom-made for me in Tokyo.”

Seriously? You forgot you legally owned at least one handgun before and after your retirement? More seriously, does like this sound like the Philip Marlowe any reader has ever heard of?

Hardcore fans of the genuine Marlowe novels know that you read Raymond Chandler far more for style, tone and characterization than for plot, the latter element being often rather difficult to make sense of depending on the particular novel. In the confusing ones—i.e., most of them—you simply coast along for the colorful, absorbing, and entertaining ride. But you needn’t concern yourself about a tumultuous journey through Only to Sleep. The ride is sluggish and largely uneventful. Lawrence Osborne reads stylistically and tonally like Chandler about as much as Ernest Hemingway sounds like Geoffrey Chaucer. The plot is practically non-existent, not at all a mystery, and the characterizations are very superficial. The protagonist could as well have been named Tooraloora Birnbaum, considering how little he resembles Philip Marlowe.

What we have here is a considerable distance from the kind of hardboiled private detective novel one expects from a pulp pioneer/master of the genre, let alone most writers’ modern take on the form. Osborne’s is a self-consciously literary approach that includes more extended, descriptive, and philosophical moments than the kinds of crackling scenes and intriguing, well-delineated characters found in the works of Chandler, his finest predecessors and legitimate successors. It reinforces what I said in my review of Benjamin Black’s The Black-Eyed Blonde: authors’ estates and their publishers should stop trying to cash in on inferior products about classic characters from imitators who should stick to their own creations.

One thing is certain: the title of this one is unquestionably appropriate. The Big Snooze would have worked, too, because I truly yawned and fought to stay awake while plodding through its verbal Ambien.

Derringer Award-winner Barry Ergang’s mystery novelette, along with some of his other works, is available at Amazon and Smashwords. One such work is “Nocturne,” included in Dances of the Disaffected, in case anyone wants to call him out about his take on Marlowe, and the publication of which had nothing to do with a major publisher or Chandler’s estate.

I forgot to add that Osborne's "Marlowe" spends a lot of time whining about having grown old, which amplifies the tedium.