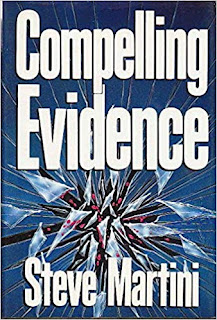 Compelling Evidence by Steve Martini (Putnam, 1992) is the first of 15 (so far) legal thrillers featuring defense attorney Paul Madriani in Los Angeles, California. Madriani is building a solo practice after his unceremonious departure from a large corporate practice, caused by the discovery of Madriani’s affair with the much younger wife of the senior partner Ben Potter. After a year of no contact, Potter wants to meet with Madriani, as it turns out, to make sure the hatchet between them is buried. Potter is on the verge of being nominated for the U. S. Supreme Court and he wants no subtle smear to mar the exhaustive background investigation that is about to begin.

Within 24 hours after their meeting Potter is found dead, the victim of a homicide clumsily disguised as suicide. Madriani is inveigled into defending the young Mrs. Potter, uneasy about their past history which, if discovered by the media, would destroy the credibility of any defense he could prepare. Add a partner who is the default recipient of Potter’s wildly successful legal practice if Madriani loses and a judge up for re-election who is determined no appeal or hung jury will tarnish his record, along with someone in the prosecutor’s office issuing unauthorized but damaging information about the defendant to the press, and the case could not be less promising.

Although the early writing in places needed a strong editor that it didn’t get, once the legal part of the story begins, it gallops at a breakneck pace until the surprise ending. (The Kirkus reviewer said the ending was predictable but I have no idea how anyone could have guessed it. Perhaps I am gullible.) Martini has the legal profession down cold, from the set-up and operations of large corporate practices to the showboating lawyer who is always chasing his next media opportunity regardless of his client’s interests he is supposed to be protecting. The lengthy section on the psychology of jury selection is fascinating. Highly recommended to fans of Scott Turow and John Lescroart.