First and foremost, Barry and I would like to express our deepest condolences to Patti Abbott and the family over the passing of Patti’s husband, Phil. Cancer is such an evil bastard. It takes and it takes and somehow the rest of us are supposed to just go on as if everything is okay when nothing will ever be okay again.

And, yet, somehow we must go on. That going on is brutal and it continues day by day. As this is Friday, that going on means it is time for another FFB review. Neither Barry nor I had anything new, so Barry suggested I run again his review below which previously appeared in this space back in June of 2016. His wish was my command and so it shall be. For the full list of reading suggestions head over to Todd Mason’s Sweet Freedom blog. 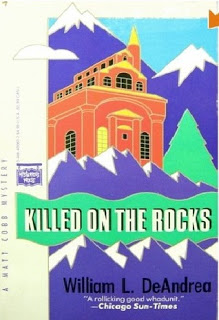 Matt Cobb is the vice-president of the Special Projects division of a television network identified only as “the Network.” As he explains in his first-person narrative: “‘Special Projects’ is the title some nameless propaganda genius gave years ago to the part of the Network that would handle everything too nasty for the Legal Department, and too sensitive for Public Relations…I’d never lusted after the job, and sometimes I didn’t want it now, but I had it, and I did the best I could. I tried to keep things as legal as necessary and as moral as possible.”

The network has been targeted for a takeover by billionaire G.B. Dost, who “bought companies the way a kid bought baseball cards, and treated them that way, too: collecting them, trading them, rearranging them, and for all I know, flipping them against other corporate raiders to see who could get his company closest to the stoop without touching, winner take all.” But the Network’s president tells Cobb someone is trying to quash the deal, shows him an anonymous letter of warning, and assigns him to accompany a number of other Network personnel to Dost’s northern New York estate, the aptly-named Rocky Point, where negotiations are supposed to begin in a home whose residents, regular and temporary, include Dost, his wife, his son, his business partner, and his longtime domestic help.

It’s February, it’s been snowing in the Rocky Point area periodically for weeks, and it’s snowing on the drive up. In fact, it’s becoming a major snowstorm. And so we have the setup for a very entertaining take on a classic “impossible crime” situation: a murder victim—in this case Dost—found in a field of unmarked snow. The nature of the murder is such that the killer would have to be close to the victim. Traditionally, the only footprints in the snow would be the victim’s, leaving readers and detectives to ponder how the murderer could have approached and slain the victim, then departed without leaving prints of his or her own. For Matt Cobb the question becomes not only who killed Dost, but also how and why his body lay a significant distance from the house in utterly unmarked snow.

Killed on the Rocks is written in an engagingly wry-toned conversational style and filled with its share of semi-hardboiled action and reasonably well-differentiated characters. This is the first of this author’s series that I’ve read, though I’ve known of it for years. I cannot only recommend Killed on the Rocks as a clever, fast-paced diversion, I’m sure if I’m lucky to live long enough, I’ll read other Matt Cobb mysteries.

Warning: some occasional raw language, including a few—but not a lot of—f-bombs, so those easily offended will want to avoid this one.

Derringer Award-winner Barry Ergang’s written work has appeared in numerous publications, print and electronic. Some of it is available at Amazon and at Smashwords. That includes his his highly regarded tale, The Play Of Light And Shadow. His website is http://www.writetrack.yolasite.com/.