Friday means Friday’s Forgotten Books hosted by Todd Mason on his blog. Today I offer you a repeat review of a mystery that blends some humor,  plenty of suspects, and more than a dash of Texas flavor. This is the third book in Bill Crider’s Carl Burns Mystery Series and available in audio and eBook formats as it has been out of print for years. 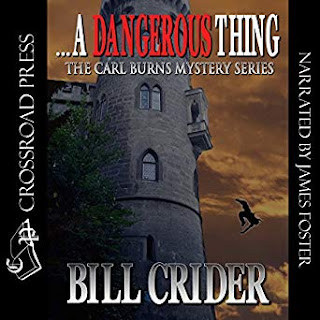 Professor Carl Burns knew the new dean at Hartley Gorman College wasn’t going to work out when she got a goat. There may have been good reasons to get a goat, but that is just not something that is a big winner in the minds of many people. While some of the staff are fixated on the goat and consider the new dean a “unreconstructed hippie”  Professor Burns, who is also chairman of the English Department, is much more worried about her other issues. Of course, if Burns had just applied for the job, he most likely would have gotten it. Burns had absolutely no desire to be the academic dean and that means everyone is going to have to deal with Dr. Gwendolyn Partridge.

While she was highly recommended nobody warned those at HGC that she was highly liberal. A conservative private school located near the small south Texas town of Pecan City, Texas was not ready for her kind of leadership. She has ideas that others would consider radical. She has also brought in Professor Eric Holt who, as other employees see it, is getting special treatment he does not warrant. Both Partridge and Holt want to significantly shake up the curriculum and that is not helping matters.

If that wasn’t enough, the death of Thomas Henderson rattles the entire college. It is clear that he died after impacting the ground due to a fall out of his third floor office window. Landing on your head tends to kill you dead. It is also pretty clear he did not voluntarily crash through the window to his death. Considering Burns’ reputation for solving such cases it is not surprising when Burns starts investigating the situation in … A Dangerous Thing.

Rich with complex characters, humor, as well as scenic details and atmosphere, this third read in the Carl Burns Mystery Series is another excellent cozy style mystery. Originally published in 1994 and recently made available again thanks to the e-book format, the mystery does not follow the current fad of dropping a murder victim in the first paragraph. Instead, it builds the situation as Texas author Bill Crider weaves a number of threads together before getting to the heart of the matter. A mighty good read, … A Dangerous Thing can be read as a standalone if so desired as it just briefly references earlier events in one One Dead Dean and Dying Voices.

I got the hardback version of this to read and review by way of the Plano Public Library System.

This series sounds like a whole lot of fun -- many thanks, Kevin. I really must read me some more Crider: I've liked the couple I've read but I know they're just a drop in the ocean.

Time for me to branch out beyond the Dan Rhodes series, and this seems like just the one to try.

Normally I push the idea of reading in order, but you can start here and get away with it. Very different than the Rhodes stuff.