Aubrey Hamilton Reviews: Light It Up by Nick Petrie 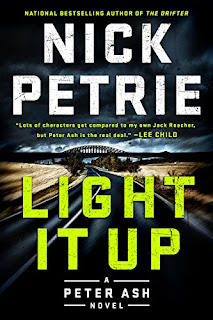 Light It Up by Nick Petrie (Putnam, 2018) is the third book in the Peter Ash contemporary thriller series. Ash is a veteran of the Middle East conflicts, dealing with painful PTSD-induced claustrophobia. In this outing he is rebuilding hiking trails in Oregon, which allows him to stay outdors. One of the volunteers on the project is a Vietnam veteran named Henry. After a few months of working together, Henry asks Ash to help him out. Henry’s daughter has started a security business in Denver to protect deliveries of legal cannabis. This is a cash-only industry, leaving it especially vulnerable to robbery. Two weeks previously a shipment vanished, the cannabis, money, driver, vehicle, and security guards gone without a trace. While Henry’s daughter regroups, Henry and Ash, with a couple of other ex-veterans, will ensure the next delivery goes as planned.

Of course it doesn’t. The delivery truck is hijacked on the side of a mountain in a neatly arranged scheme that leaves Ash slack-jawed in admiration, when he isn’t trying to figure out how to escape. The hijackers, who have a considerable arsenal and don’t mind using it, seriously hurt Henry and kill one of the other guards. Nonetheless, Ash manages to extricate himself and Henry in a savage dogfight that left me wondering what could possibly happen in the remainder of the book to top it.

Some of the characters are a bit predictable: flawed protagonist and the psychopath who manages to fool most people most of the time, for instance. However, Ash is described as having the thoughtful eyes of a werewolf a week before the change, which is certainly not routine. The dishonorably discharged Marine, who is more or less blackmailed into supporting the crime boss, is a new one, though, and more sympathetic than he’s probably meant to be. Ash’s love interest is a fine twist on the traditional. June is self-sufficient and unafraid to let Ash know she wants him in her life, but on her terms. And since she carries pepper spray and a small knife with her, when she is captured by the psychopath, she doesn’t need to wait for someone to rescue her, thankyouverymuch. I really like this character.

A fascinating view into the world of legal cannabis growers and an excellent addition to the thriller genre. A galloping good story.