Aubrey Hamilton Reviews: Bad to the Bones by Rett MacPherson 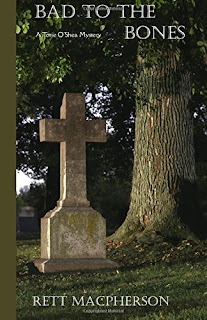 I was delighted to learn that Torie O’Shea has reappeared after a long hiatus. Rett MacPherson published 11 mysteries between 1997 and 2008, the most in any series I know of that uses genealogy as its theme. Torie lives in fictional New Kassel, Missouri, a small town on the Mississippi River about an hour south of St. Louis. Like many cities that sprang up along a river, New Kassel used its historic past to develop a thriving tourism industry. Torie is a docent in a local museum, giving tours of a restored mansion and researching family histories. And, since these books were written before Ancestry and other online research sites existed, she conducts her genealogy the old-fashioned way, by reading census records and visiting courthouses and checking ship passenger lists.

Bad to the Bones (Word Posse, 2018) brings Torie back, older, chunkier, with her children more or less grown. Torie is happy that New Kassel is still thriving but she is bored with life. In addition, her doctor told her she needs to lose 30 pounds, and the idea that she has to give up sweets is more than she can bear. Why can’t she eat pie twice a day every day? So unfair! 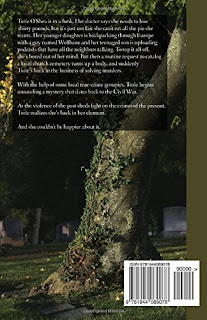 Torie rarely is asked to assemble a family tree these days, as most folks are using the online sites. So when the local Catholic church asks her to compile birth, marriage, and death records and cross-reference them against the cemetery inventory, Torie jumps at the task. While taking a break one day, she notices a coyote who seems to be interested in a particular spot on church grounds. Torie wonders what’s there and finds a bone that she is sure is human. She calls the police, and they unearth a recent skeleton; a few yards away they discover several sets of older bones. The presence of Civil War uniform buttons and belt buckles places the age of the older remains, but the newer set is harder to pin down.

Torie throws herself into the mystery of identifying the bones, older and newer. While genealogy does play a part, local and state history during the Civil War is more prominent. This latest story in the series has all of the same characters from the earlier books, a little older, but the dialog is similar to the previous books and the characters relate to each other in the same way. Torie uses her research skills to identify key clues, despite being warned away by the police, as usual, and ends up nearly getting killed along with her son and their newly acquired bear-sized dog. A satisfying read and a welcome return of a favorite series.