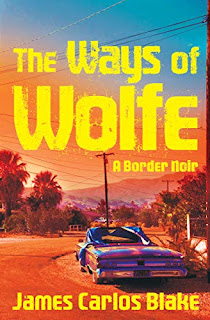 The Ways of Wolfe by James Carlos Blake (Mysterious Press, 2017) is the fourth book by Blake about the Wolfe crime family whose business interests lie on both sides of the Texas-Mexico border. Axel Prince Wolfe, his father’s planned heir to the family law firm, decides to join his high school friend and a stranger in the theft of three-quarters of a million dollars’ worth of bearer bonds. Already married with a small daughter, he is planning to drop out of college and focus on the family’s criminal enterprises, despite the family rule that everyone must obtain an undergraduate degree before joining the company. [The Rules of Wolfe (Mysterious Press, 2013) goes into this requirement in more detail. I raved about this book in a post to DorothyL while attending the 2016 Left Coast Crime convention and still refer readers to it at every opportunity.] They successfully acquire the bonds but the getaway goes sideways, and his partners abandon him to save themselves. He refuses to give up the names of his cohorts to reduce his prison term, and he is sentenced to an onerous 30 years.

His relatives turn their backs on him, and he becomes fixated on the daughter who won’t visit him or write him. After 20 years in confinement he joins a young Mexican inmate with hidden ties to a cartel in planning a jail break, and they escape during a driving thunderstorm, leaving several bodies in their wake. After they manage to cross the river into Mexico, Axel is invited to join the cartel and helps them in an ambush of a rival gang. He desperately wants to see his now-grown daughter though, and off he goes.

Blake is an exceptional writer of fast-moving crime dramas. His grim descriptions of border desert crossings are meticulous in their hair-raising detail, and his depictions of shootouts and other action scenes are intense and pulse-pounding. While he’s received a good deal of recognition from critics, he is still not widely known among the thriller and mystery reading community, which is truly unfortunate for everyone.