Barry Ergang is back this week with another all new review. For the full list of reading suggestions, check out Todd Mason’s Sweet Freedom blog. 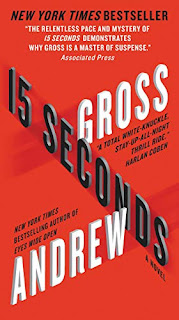 The premise is intriguing: successful plastic surgeon Dr. Henry Steadman (who, we eventually learn, has his share of emotional baggage) is pulled over by a cop for a minor traffic violation, a cop who refuses to listen to Steadman's side of events. Steadman has flown from to to attend a medical conference and play a round of golf with a friend. The cop treats him like a criminal rather than one guilty of a traffic offense, even to the point of arresting and cuffing him and putting him into the back of a police car. Several other police vehicles arrive and Steadman is questioned about the whereabouts of his wife. When he explains that he doesn't know because he's divorced, he's told he was seen driving around with a woman in his car an hour earlier.

The police persist in questioning him, making additional accusations, and denying his protests of innocence of their various charges until they finally cease and depart—all except the one who initially pulled him over. This one tells him, "I'm going to write you up a warning...Just take a seat back in your car." Steadman complies, and a moment later another car pulls up alongside the police vehicle. Steadman hears two loud pops, after which the car takes off. When he gets out and looks into the police vehicle, he sees that the cop is dead from gunshot wounds.

When he recovers from the shock of both the cop's murder and the realization that he'll be the prime suspect, Steadman sets off after the murderer's car and kicks the rest of the novel into play. Besides Steadman, whose narrative is in the first person, we follow those in the third person of a "plucky" female cop (one with baggage), and the villain of the piece (who also has baggage—are you sensing a trend yet?).

In addition to trying to save himself and prove his innocence, Steadman must also save the greatest love of his life in what turns out to be a "sinister scheme" with him as the primary target. 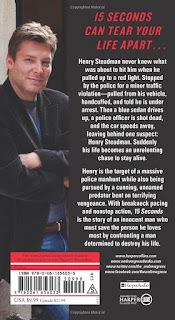 Yes, it's all quite formulaic, and written and structured in a manner calculated to generate page-turning suspense. The problem—for this reader, at least—was the delivery, particularly the author's predilection for depicting his characters' emotional reactions to events via impossible bodily responses. When he discovers the cop has been murdered, Steadman tells us, "My heart surged into fifth gear." When circumstances put him close to one of the cops who interrogated him, he says, "My heart almost clawed its way up my throat as I vividly recalled what he had warned me of if our paths ever crossed again." Three paragraphs later: "My heart clawed its way up my throat."

Several chapters later: "I felt the sweats come over me and my insides slowly clawed their way up my throat." A good deal further on: "Carrie closed her eyes and let out a breath she'd been holding in for hours."


Carrie, poor oxygen-bereft baby, suffers still further: "She saw whom the bill was made out to, and her stomach fell like a ten-ton weight hurled off a cliff." Four paragraphs later: "Her breath felt cut in half." Somewhere along the way we also learn, "Her heart sputtered."

One of the most unintentionally comical moments, due to poor editing, occurs when Steadman comes upon a shed in a wooded area and gives us this: "My heart started to pound. It had a slanted roof and one window and what looked like a storage hut attached to it...."

Hmm...Did it make storing gardening tools and a lawn mower among the aorta and valves vexatious?

As you have doubtlessly surmised by now, 15 Seconds is not, in my estimation, a stellar example of a thriller. Yes, it will keep many readers turning the pages, but they'll have to forgive a predictable and formulaic approach while doing so, along with tolerating a great many lame passages that can render the intended drama fatuous. I've read books aimed at children and young adults whose prose is far more artful and evocative.

If the silliness described isn't a turnoff for some readers, the use of raw street language might be.

Some of Derringer winner Barry Ergang's work can be found at Amazon and Smashwords.