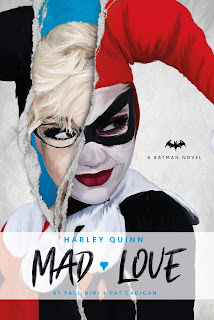 Harley Quinn: Mad Love: A Batman Novel by Paul Dini and Pat Cadigan. This novel is adaption and expansion of the original Mad Love Comic. This novel makes several changes to the original comic and serves as a Harley Quinn origin novel. The book addresses such questions such as, what was Harley Quinn’s childhood like? How and why did she fall in love with the Joker and other questions. This novel helps explained why Harley Quinn behaves the way she does and answers things I never conceived.

It is an enjoyable novel adult novel that is told in multiple perspectives. Several of the perspectives are unreliable and clearly have biased interpretations of the events.  I enjoyed this detailed look into Harley Quinn’s mind and the psychological analysis of various characters in the Batman mythos such as Joker, Poison Ivy, and several minor characters in the Batman Universe like Mad Harriet, Magpie and more.

The story is pretty good, but there is one major logical flaw in the novel. It requires the belief that people don’t use google to look at the background of people they hire.  The book is set in current time, in our frame of reference, when everybody is looking at the backgrounds of everyone and yet the characters in this book never once examine the social media history of anyone else. This aspect is a huge problem that I can’t go into further without ruining the novel.

Despite that obvious flaw in the story I enjoyed it, even if the story lets Harley Quinn lets her off easy for her actions and does not delve very deeply into the her often toxic relationship with Joker. The ending is different than the original comic and is more consistent with how DC Comics is portraying the character now instead of then. DC comics is trying to rebrand Harley Quinn from being the “evil girlfriend” to an “abuse survivor antihero” type character that can also occasionally work with the Justice League. DC Comics would prefer these days to blame her crimes on the Joker and her own mental illness that have the fact that she was always depicted as willingly making her choices that led to bad things.

All in all, I enjoyed Harley Quinn: Mad Love: A Batman Novel by Paul Dini and Pat Cadigan.

Material supplied by the good folks of the Dallas Public Library System. My copy came from the White Rock Hills Branch.