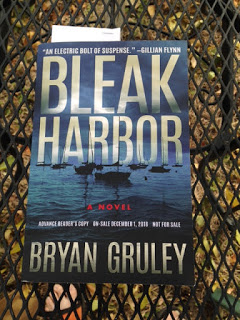 My final review of 2019 was on the soon to be released book, Purgatory Bay. While it is not really an FFB review worthy title because of the recent publication date, I thought I would remind you today of my review from a little bit over a year ago of the first book in the series, Bleak Harbor. You should also read his Starvation Lake Series. For more reading suggestions, make sure you check out the full list over at Todd Mason’s Sweet Freedom Blog.

It has been several years since his excellent series billed as The Starvation Lake Trilogy, but finally author Bryan Gruley is back with a new book. Bleak Harbor more than lives up to the hype surrounding it.

Daniel Peters, who only goes by Danny, is about to be sixteen. Son of Carey and Andrew, he isn’t that fond of Bleak Harbor. It is a Thursday as the book opens and Danny is spending his time, as he often does, out on the dock watching the dragonflies.

Dragonflies are a major part of his life as an autistic young teen. They are also the reason for the upcoming annual “Southwestern Michigan Dragonfly Festival” that starts tomorrow which also happens to be his birthday. This will be 28th such festival in a city known more for the legacy of the Bleak family. Daniel Peters is a part of the Bleak family and that legacy even if his incredibly wealthy grandmother, Serenity, refuses to acknowledge his presence or existence. She has the town and her family firmly under her control and their failure to cooperate has economic consequences for anyone and everyone.

That includes Danny’s parents as his mother is Carey Bleak Peters, daughter of Serenity. She has many regrets and they include moving to Bleak Harbor. She did it to help her husband start his already failing medical marijuana business as well as get help for Danny from her family. As that has all failed, she has made a last ditch gamble. Now that she has proof of several different things, she can take down her boss and his company. She has told him she won’t pull that trigger---if her wealthy and powerful boss pays her ten million dollars for her silence. Not only can he afford it, she really wants to take Danny away with her so that they can start a new life. Daddy, who is working his own agenda, won’t be part of that new life.

Before she can make good on their escape, Danny goes missing and has obviously been kidnapped.

As the hours pass, things escalate out of control in this thriller. Author Bryan Gruley follows the standard thriller formula these days of keeping the chapters short and the point of view constantly changing as he ratchets up the tension. He also does a superb job of misdirection that surprised this reader. Bleak Harbor is engrossing and intense read from start to finish and very much worth your time. Sadly, the second book in the series, Purgatory Bay, is not currently scheduled to come out until January 2020.)

Thank you, on both counts.

I am trying. I am under 60, but at high risk for this damn thing. At least it has stopped everyone who is local from trying to get me to go somewhere thinking it will help with the deep sea of grief. It may be the 20th of March 2020, but it still feels like her passing just happened.

Anyway, hope you are well and staying healthy as well, Alex.