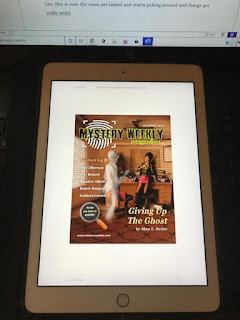 Mystery Weekly Magazine: November 2019 is a six-course smorgasbord of mystery dishes along with a couple of detectable appetizers. As always, this is a magazine that embraces a wide range of mystery readers and this issue is no exception.

The issue opens with “Giving Up The Ghost” by Shea E. Butler. Belle Lopez was a hooker at one time. These days she is a private investigator. The recently departed, Conrad Charles, was her client. The problem is that he was really the client of her mentor and boss, Leo Gillepski, who was also recently murdered. She knew nothing about the case before his death and Conrad Charles did not tell her much when she took it over beyond why he had hired Leo. She is sure the cases are linked and starts poking around and things get really weird.

Heidi is going to marry Greg as “Cold Feet” by Nils Gilbertson begins and her brother is less than impressed. But Mitch knows how his sister is and Greg seems to understand her as well. He seems to have had a good influence on her so Mitch is reserving judgement and hoping for the best. That is until she starts expressing misgivings about who Greg really is or what he might be in this technologically crazy world.

Clearly the driver was shot in the head before he crashed the car in “Midnight In A Sea Of Marble” by Dev Bennett. He wasn’t the only one shot and killed. Dead guys in a stolen Cadillac SRX are eventually identified as guys with links to organized crime. A neighborhood canvas is going to be done for an area the dead guys had a keen interest in acquiring. This is an intense and complicated story and was my personal favorite in this issue.

The need for a shovel should have clued Nathan Shields into thinking that things were going to go wrong in a bad way. The fact that the property was posted should have warned him off as well. Neither did and soon he was under the glare of police lights and guns in “Digging Up Bones” by Brandon Abbott. 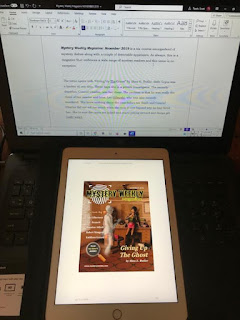 Things have gone decidedly wrong and now a certain food critic is very much dead in the historical mystery “Murder On The First Night’s Feast” by Robert Mangeot. The murder charge is against Vicomete Montvaste and he is in custody. Now, Madam Feubert and others must put up with an investigation led by Duplanche who, not only is beneath her in stature and dress, may also be poor at his job.

If you are going to complain, you need to do it in writing and do so in a certain way as explained in “To Whom It May Concern” by Kathleen Gerard. Listen to the expert who parlayed her talent in written complaints into a quite well-paying gig that improved her quality of life dramatically.

The “You-Solve-It” puzzle this month is “Disappearing Diamonds” by Peter DiChellis. Ms. Olivia Hadlowe is quite upset and for very good reason. Her best diamond earrings are gone. She wants them found and can’t have the police involved. She wants the narrator, a private detective, to find them and to do so quickly.

The solution to the October “You-Solve-It” puzzle “Cater-Wail” by Laird Long brings the issue to a close.

The eight in total tales here on all good ones. Like any good mystery, each one is far more complicated than the brief synopsis here would suggest. Variety is the spice with this publication, and such is the case here with Mystery Weekly Magazine: Nov 2019. It is well with your time and money.