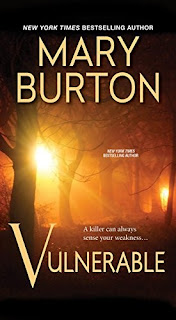 Vulnerable by Mary Burton (Pinnacle, 2016) is the fourth book in her series about the Morgans of Nashville, Tennessee. Georgia Morgan is the youngest of the family with three older brothers, all working in law enforcement agencies. She is a forensic technician in the Nashville Police Department, freshly assigned to a cold case. Five years ago, three teenagers went into a local park that covers 2600 acres and didn’t come home. Two days later one of them was found unconscious with a head injury and broken bones. She had no recall of the day, consistent with the severity of the concussion, and the other two teenagers were never located. Police thought the two had perhaps run away together but the wealthy father of one missing teen denied the possibility. He recently renewed his pressure on the police department to find his son, hence the assignment of the case to Georgia and homicide detective Jake Bishop.

The discovery of a murdered college student leads to a hidden cave in the park where the remains of the two missing teenagers were found. The likelihood that more than one murderer knew about the remote cave seems unlikely to the police, so they begin searching for links between the high school seniors and the college student and ways to identify someone they fear is a serial killer. They revisit the people who were around the missing teenagers in the last months before their disappearance and find that the passing of time has jarred some secrets loose.

On one level this story is a good police procedural with a lot of forensics. On another, it’s a predictable romance, which ordinarily would be enough for me to put a book down. In this case the investigation and the mystery kept me reading. Georgia’s side gig of singing in a bar adds a nice Nashville touch. The author is described on Amazon as specializing in romantic suspense, which doesn’t really apply to a story so heavy on law enforcement process and forensics. This seems to be another of those books that does not clearly fall into any one category. Recommended for readers who enjoy a romance along with their mystery.