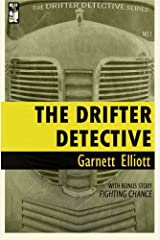 Back in March and April of 2013, Barry and I in separate reviews gave our thoughts on The Drifter Detective. With news in recent days that a new installment of the series is coming, it seemed fitting to again remind everyone of this excellent series. Therefore, as a FFB Double Take Review, Barry and then I offer thoughts on the first book of the series. Please note that when we reviewed the book it was available as an eBook and did not contain the additional short story “Fighting Chance.” It also had a far different cover design that I very much liked and briefly referred to in my review. It appears that the eBook is no longer available and the print is only available via third parties at an insane price.

After you read the reviews, make sure you head over to Patti Abbott’s blog as well as Aubrey Nye Hamilton’s Happiness Is A Warm Book blog and see what they suggest today. Todd Mason is back collecting links so you will have even more suggestions om his Sweet Freedom blog later.

Have a good weekend! Go COWBOYS!!!!

"The Drifter Detective" (2013) by Garnett Elliott

In Texas just after World War II, investigative jobs in cities like Dallas and Houston are hard to come by for one-man operations because big firms like the Pinkertons and others tend to get them, so ex-G.I.-turned-P.I. Jack Laramie tools around rural areas in search of business, hoping to eventually amass enough money to open an office in San Antonio or Austin. Towing a horse trailer, which he sleeps in, behind his DeSoto coupe, he's on his way to Abilene where there is a "hint of a job" when the car begins to act up. He manages to get it to the small town of Clyde and to a service garage. The proprietor assures him that because it's late afternoon, the car's problem won't be diagnosed until the next day at the earliest.

The man gives Laramie directions to the local saloon, and tells him the widow Talbot runs a boarding house where he might get a room for the night. (Laramie figures it wouldn't be a good idea to sneak back to the garage to sleep in the horse trailer.) Soon after he meets Sheriff Gideon Hawes, who says he can throw some work Laramie's way. The job, he learns the next morning, entails keeping an eye on the estate of a prominent local citizen, Thomas McFaull, who might be engaged in some illicit activities. Laramie agrees to do it, and quickly finds himself entangled with McFaull's promiscuous wife, a surly sheriff's deputy, a railroad worker, and the flirtatious widow Talbot. It isn't long before matters turn dangerous, and Laramie finds himself wondering if things are really as they seem and whether he'll survive so he can get back on the road to Abilene again.

A neatly-paced, action-packed long short story, "The Drifter Detective" is written in a colorful but not overwrought style and populated with characters the author imparts life to. For fans of hardboiled fiction with pulpy flavor and texture, this one is well worth Amazon's 99¢ asking price.

For my take on the book…

The Drifter Detective: A Jack Laramie Beat by Garnett Elliott is the latest release from Beat To A Pulp and is a very good one. The striking and well done cover only hints at the powerful tale inside as the read takes readers to West Texas and the world of private investigator Jack Laramie. After a clash with a local ranch hand as he closes a case, Jack is happy to get back in his Desoto and head out of Cross Plains, Texas. He doesn’t make it very far down the road before mechanical issues cause him to have to find a garage. His quest for a place to drink and a bed for the night in Clyde, Texas will create new problems in unexpected ways.

Grandson of the legendary US Marshall, Cash Laramie, Jack is a tough WWII vet who has seen the worst the world has to offer. These days he lives out of an empty horse trailer attached to his old Desoto and does the best he can to survive. This novelette of approximately 9k words is a hard hitting read that is excellent and very much well worth your time.

Material supplied by David Cranmer in exchange for my objective review.