FFB Review: The Religious Body: The Calleshire Chronicles Book One by Catherine Aird

Readers familiar with Aubrey Nye Hamilton’s reviews each Monday are aware that Aubrey is a fan of this series. Back in September 2017 she reviewed A Dead Liberty which is the twelfth book in the series. She reminded you of this series when she reviewed the twenty-second book in the series, Past Tense. After two reminders, it seemed like a god idea not to wait for a third. So, I went to the beginning with The Religious Body.

After you read the reviews, make sure you head over to Patti Abbott’s blog as well as Aubrey Nye Hamilton’s Happiness Is A Warm Book blog and see what they suggest today. Todd Mason is back collecting links so you will have even more suggestions om his Sweet Freedom blog later. 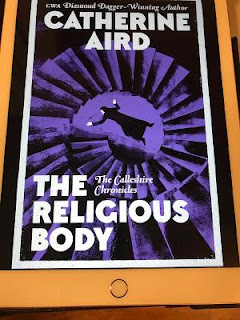 The Religious Body by Catherine Aird is the first book in The Calleshire Chronicles and is a good one. What initially presents as a locked room mystery set in a nunnery is far more complex than the initial set up would have the reader believe.

It is early November and before dawn at the Convent of St. Anselm as the book begins. Sister Mary St. Gertrude arises, and is her role each morning, goes about her morning duties. It is her duty this month and she moves through the building following the prescribed order of awakening all inside those walls. It takes a while with more than fifty people to awaken so that each may go about their day. As a result, it takes a while for the bloody thumbprint to gain attention and for the realization that Sister Anne can’t be found.

So, several hours have passed before Inspector C. D. Sloan and Detective-Constable William Crosby, a young officer and new to the Criminal Investigation Department of the Berebury Division of the Calleshire Constabulary, are dispatched to the covenant located a few miles away in Cullingoak village. Upon arrival, it takes additional time for them to be allowed into the inner rooms of the Covent and eventually to the body. Sister Anne is at the bottom of the cellar stairs and clearly died due to some sort of blow to her head that reshaped her skull. It is also clear, at least to C. D. Sloan, she did not die as a result of falling down the stairs.

To catch a killer, they have to work a case where normal witness behavior goes totally against the rules of the Convent and the faith and practice of the nuns. It is a good thing C. D. Sloan has the patience of a saint coupled with a touch of subtle humor and a knowledge of history.  Not just helpful with the nuns, his skills also help him manage his boss.

A complex mystery full of clues and misdirection The Religious Body by Catherine Aird is a solidly good read. It moves fast despite the subtle observations about life and other things expressed by Inspector C. D. Sloan that are mixed in throughout the read. A solidly good foundation is laid here in the first book and I very much enjoyed it.

As my local library does not have this read in print, I was forced to go with the digital version via the library. While my copy from Open Road Media indicates the book is 210 pages, it was actually far less than that as there were ads for other reads as well as a long excerpt from the start of the next book in the series, Henrietta Who? That book is available in large print and is now on my holds list at the Dallas library.

The Religious Body: The Calleshire Chronicles Book One

Material came by way of the Dallas Public Library System.