Scott's Take: A Chain Across The Dawn (The Universe After Book 2) by Drew Williams 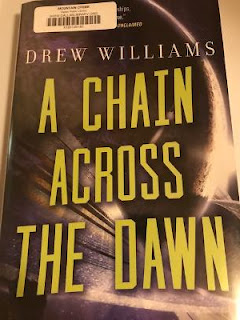 A Chain Across The Dawn by Drew Williams is the sequel to The Stars Are Now Unclaimed. While the first book focused more on Jane, this book focuses more on Esa and is set three years later when she is Jane’s partner. Together they work as a team to rescue gifted children.

Their latest rescue involves a Wulf (think wolf alien) boy named Sho who is being hunted by an unstoppable monster with advanced technology and no regard for humor or alien life. The creature may have the answers to how to undo the pulse, but there are two major problems with trying to find out. He is absolutely insane and incredibly powerful. He is killing everything in his path and won’t stop until he kills them and Sho.

This book ends with a bang that sets up the third book called The Firmament of Flame which I am on hold for at the library. I eagerly await the third book in this amazing series. One should definitely read this series in order as the first book is a huge influence on the sequel.

My reading copy came from the Mountain Creek Branch of the Dallas Public Library System.