Guest Post: Looking for Mishka — Why? by Jim Guigli 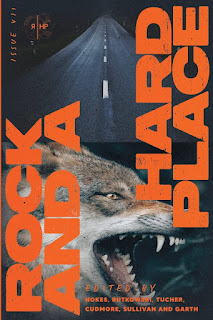 Please welcome author Jim Guigli to the blog today as he discusses how his short story, Looking for Mishka, in Rock and a Hard Place: Issue 7: Winter 2022, came to be. The new issue came out last week and I picked up my eBook copy as soon as it dropped.

Looking for Mishka — Why?

My short story, Looking for Mishka, is now available in Issue 7 of Rock and a Hard Place Magazine.

This story, like most of my fiction, is about private Detective Bart Lasiter.  After he had enough time serving the Berkeley, California PD, Bart moved north to open a tiny office in Old Town Sacramento.

While plotting a Bart Lasiter novel, I faced a research problem.  In my respectful parody of the Marlowe/Lew Archer genre, Under the Black Flag, an important question about the laws and legal codes directing California private investigators stumped me and my inexperienced private detective.

In helping a wealthy Lake Tahoe woman deliver ransom to the kidnappers of her husband, what were Bart’s legal obligations?  His client didn’t want police involvement.  Was Bart required to notify law enforcement?

I couldn’t find a straightforward answer, even after a lot of online research and consulting both a working private investigator and a San Jose PD detective.  My solution was to have Bart remain as unsure as his author:

Did he have to report it?  He wasn’t sure.  He’d never had a kidnapping case before, except for Mrs. Tereshkova’s cat.

I continued with the novel, but Mrs. Tereshkova’s cat needed a life.  In time I invented the back story that became Looking for Mishka.

Another cat, Aggie/Agamemnon, appears in this story.  This guy was real, our pet, until he died last year at 18.  The Bart Lasiter stories featuring Aggie describe him as he was in life — except for drinking whiskey.

I hope you enjoy Looking for Mishka and Rock and a Hard Place Magazine.

As a Jack-of-All-Trades, Jim Guigli is an experienced SCUBA diver, auto-mechanic, and gunsmith, attended Gunsite for five weeks of pistol & shotgun training, worked twenty-five years as a mechanical designer for National Laboratories, served as an Army Security Agency Russian Voice Intercept Operator in Japan, toured Quantico as an FBI Citizens Academy graduate, dabbled in architecture including designing and supervising a 400 sq ft kitchen addition to our house, and earned an MA in Art (Photography).

As a member of several writers’ groups, Jim offered firearms technical advice to other writers. His website is http://www.jimguigli.com/

I thoroughly enjoyed the post. Jim is a friend of mine through the Public Safety Writers Association, and I've read one of his novels. i like his main character and the area he writs about.

Thank you for reading/commenting, Marilyn.