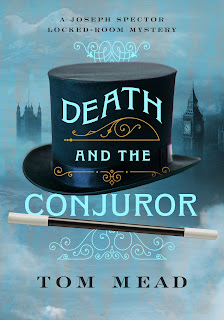 Please welcome author Tom Mead back to the blog today. Make sure that you check out his previous post here that he linked to today.

I previously contributed a post to this blog about underrated locked-room mystery novels (you can read it here). But since I'm such a devotee of the genre, I couldn't stop there. There's something unique about the challenge of an impossible crime short story. If a locked-room mystery novel can be likened to a magic show, then a short story is a game of three-card monte. It requires the same levels of skill and panache, albeit in a more concentrated form.

As before, I'll be steering clear of the biggest names in the genre to highlight some titles which deserve their moment in the spotlight. So you won’t be seeing Jacques Futrelle’s “Problem of Cell 13” or Melville Davisson Post’s “Doomdorf Mystery” here, nor any John Dickson Carr or Ellery Queen. And again, this isn't a "best of" list- it's just about highlighting some great work. There are so many sensational stories out there that it's impossible to include them all. So, without further ado, let’s get to the list:

“The Case of the Horizontal Trajectory” by JOSEF ŠKVORECKÝ

Czech-Canadian author Josef Škvorecký had a remarkably distinguished career, championing dissident authors and fighting against totalitarianism in the country of his birth. He wrote a string of remarkable novels, and among his many honours he was nominated for the Nobel Prize in 1982. One of his finest creations is the sleuth Lieutenant Boruvka, who appears in a large number of short stories. Of these, “The Case of the Horizontal Trajectory” offers a unique and gruesome locked-room murder with a completely original gimmick.

Where to find it: Originally published in The Mournful Demeanour of Lieutenant Boruvka, subsequently reprinted in The Realm of the Impossible (ed. John Pugmire & Brian Skupin)

“The Haunted Room” by GIGI PANDIAN

Gigi Pandian has established a highly successful mystery writing career, and frequently offers hints of impossibilities in her work. With her short story collection The Cambodian Curse she set herself the tantalizing challenge of using each and every trick discussed by super-sleuth Gideon Fell in his fabled locked-room lecture which appears in John Dickson Carr's classic novel The Hollow Man. All the stories in this collection are good, but "The Haunted Room" is GREAT. It features her series detective Jaya Jones in a tale of apparently uncanny theft. The trick is utterly original- dazzlingly so. This is a tale that deserves to be anthologized and celebrated far and wide.

Where to find it: Originally published in Bouchercon 2014 Anthology, subsequently reprinted in The Cambodian Curse.

“The Witch of Park Avenue” by EDWARD D. HOCH

Edward D. Hoch is a titan of the locked-room mystery genre, and a specialist in short stories. He wrote nearly 1000 of them. This is both a marvellous boon because it means there is so much of his work out there for us readers to enjoy, but it can also be frustrating in that the sheer volume of his work means there are plenty of excellent stories which have not received the critical acclaim they deserve. One example is “The Witch of Park Avenue,” which features the series detective Simon Ark. Ark is a mystical figure, who claims to be a 2000-year-old Coptic priest and frequently finds himself at the centre of mysteries tinged with the impossible. “The Witch of Park Avenue” features a murder that occurs in (of all places) the revolving door of a Park Avenue apartment building. How could a man step through unaccompanied, only to die as he crossed the threshold?

Where to find it: Originally published in Ellery Queen Mystery Magazine, subsequently reprinted in The Quests of Simon Ark.

Like Edward D. Hoch, Arthur Porges wrote a stunning amount of impossible crime short stories, though he remains unjustly obscure. He created several series detectives; the hero of “Coffee Break” is Ulysses Price Middlebie, erstwhile college professor turned “crime consultant.” This is a deceptively simple tale where an eccentric inventor is believed to have committed suicide in a locked cabin. But there is so much more to this apparently open-and-shut case than meets the eye.

Where to find it: Originally published in Alfred Hitchcock Mystery Magazine, subsequently reprinted in These Daisies Told.

“By an Unknown Hand” by JOHN SLADEK

John Sladek is best known as a science-fiction writer, but that is the mystery genre’s loss. With this short story, he introduced the world to eccentric super-sleuth Thackeray Phin, who would go on to appear in his novels Black Aura and Invisible Green- both neglected masterpieces of impossible crime. But “By an Unknown Hand” is where it all started, and finds Phin tackling the apparently impossible murder of an artist. The sheer breadth of imagination and ingenuity crammed into the scant few pages of this story is stunning. If only Sladek had written more.

Where to find it: Originally published in The Times of London Anthology of Detective Stories, subsequently reprinted in MAPS: The Uncollected John Sladek.

Tom Mead is a UK-based crime writer specializing in locked-room mysteries. He has written short fiction for Ellery Queen Mystery Magazine, Alfred Hitchcock Mystery Magazine and numerous others. Recently, his story “Heatwave” was included in The Best Mystery Stories of the Year 2021 (edited by Lee Child). His novel Death and the Conjuror is forthcoming from the Mysterious Press in July 2022. John Connolly has described it as “a novel to intrigue and delight” while Daniel Stashower calls it “both an elegant tribute and a cunning update of the classic ‘impossible crime’ story.” Tom’s author site: https://tommeadauthor.com/ and Facebook.

What a great list--can't wait to read them all. Thank you, Tom!

Yup,I have read these and they are pure delights,I want to add a few -

1.Tge cleaver by Paul halter-i don't know why this story isn't discussed more and more,this is a wonderful tale with a dream which become reality but ofcourse it's not a coincidence is it? You can find it in the short story collection The night of wolf with other of halter masterpieces.

2.The phanthom stallion by Edward d hoch- with so many stories it's meant to overlook some masterpiece,her is one of them ,a Carr like eerie tale and clever impossible crime. You can find it in the Ben snow collection.


3.The smart dummy in the tent by takemaru abiko- Honkaku mysteries are always fun ,this is a comedic and clever impossible short story.you can find this in the June July piblition of 2019 Ellery queen mystery magazine.and do check out other honkaku short stories with the red locked room by tetsuya ayukawa and kekicho osaka's teh Ginza ghost .

4.The Murder Of Innocence –by paul doherty-i love his novels with historical setting and masterfully crafter impossibilities but it's a shame that his short stories are so underrated because this one is one of the best you will read out therr.you can find it in 1995 – The Mammoth Book Of Historical Detectives

5.I was the boy with the drum by Theodore roscoe-Another underrrated shortasterpiece ,in this ,a ghostly drum and a vanishing of someone doesn't make sense till you read the answer yourself which is cleverly designed to interweave them,really I want more of Roscoe.

Now if I sateted it's hard to stop,there are really so many underrated short stories,some are published just few years ago but do not let them get lost in mist of time,with so many happening in locked room story,it's natural that few gems get lost like those of commings and sladek and brand and Talbot and I don't know how many I never even get to read the title,so do mention tales like the stalker 8n the attic by edogaelwa tampo and the girl who stick by Anne van Doorn ,so they don't get unmentioned then forgotten.
And for more short stories you can find excellent list from bloggers like tom cat ,jj ,Brad and others .

Thanks for this great post. Looking forward to reading these stories!