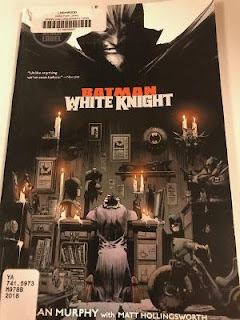 Batman: White Knight by Sean Murphy is another Batman book that is part of DC Black Label line of books. As such, that means it is a non-canon Elseworlds tale and is intended for adult readers as it will be more violent and features adult content.

In this graphic novel, the Joker is cured of his insanity and becomes plain old Jack Napier again. He then decides to call himself the White Knight and embarks on a quest the city of Gotham. He intends to expose the corruption of the wealthy of Gotham, GCPD, and turn the city against the Batman. At least that is the initial premise of this tale, but of course things do not stay that simple for long. 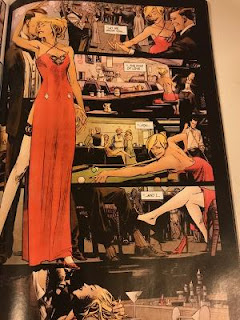 Since this is an Elseworlds tale, the author was allowed to create different versions of the Joker and the Batman than commonly depicted by most writers. This Batman is more violent and is clearly a more traumatized Batman then what readers normally get to see. This Joker officially has a less violent reputation and is a more of a redeemable human being than most depictions of the Joker. The author tries to write the Joker as a more heroic character than normal while writing Batman as a loose cannon vigilante.

The supporting cast of this tale is rather large and includes various Gotham villains, and heroes. The main characters in this graphic novel are Batman, Harley Quinn, and The Joker. This is an action packed read that raises very philosophical questions about the DC universe and features detailed artwork. Batman: White Knight by Sean Murphy is very good and launched a series of graphic novels that are pretty good too. This series is continued in Batman: Curse of The White Knight.

My reading copy came from the Lochwood Branch of the Dallas Public Library System.