This collection of slightly more than 61K words (approximately 173 pages) contains twenty-four erotic crime stories that previously appeared in various men’s magazines. These are adult stories and that means they are very graphic and detailed with regards to sexuality. The tales appeared in a wide assortment of men’s magazines with most of the publications cited here no longer in print. The stories were first published anywhere from ten to nearly thirty years ago and are now combined together in this good very adult e-book. Nearly all the tales have a final twist at the end that will surprise most readers. 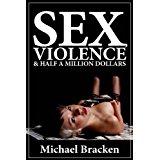 The story book opens with “Adam’s Rib.”  The narrator was sick of Florida so he agreed to swap vacation houses with friends over his wife’s objections. Now it is snowing like crazy and Katrina isn’t happy. Her being upset and the mounting snow day after day begins to take a toll in unexpected ways.

Teddy made the mistake of sliding a twenty dollar bill into the dancer’s G-string and simultaneously pulling out two five dollar bills. Dancers don’t ever make change. The dancer is upset, the bouncer is mad, and things quickly go downhill in “America’s Most Wanted.” Complications rapidly escalate for all in this story that quickly goes a far different way than expected.

In “Wheels Within” Nick sits at the bar next to a woman who clearly has been crying. Her name is Amanda and she has a story to tell that Nick definitely wants to hear. Maybe the sight of his badge will get her to talk. Not only talk, but, just maybe quite a lot more.

It all began in “The Naked City” where a murder case at a cheesy dance club brings in two seasoned detectives and a dancer willing to do more than talk. The homicide case isn’t the only connection between the dancer and the homicide detective, but it’s a start.

Every man knows “Fast Cars, Pretty Women” are trouble.  For this narrator he knows what gets him into trouble and still can’t stop himself.  Kimberly Patterson is large breasted, beautiful, blonde, and drives a Corvette. What more could he want? Even better she needs a little help from our narrator.

Keeping an eye on what goes on in the neighborhood has possibilities in “Watching The Watcher.” If he hadn’t been so busy watching everyone else he might have gotten his contracted work done. Instead, he watches the neighbors and in turn is watched by at least one other.

Nearly every guy has a system and Eddie Garrison does too in “How to Pick up Beautiful Women.”  Eddie’s new drinking buddies in the bar don’t believe he can pick up a beautiful woman---especially the way he looks. They call him on it and have the cash to place the bet. They also plan to set all the terms of the bet as well as pick the female target. What could go wrong?

For the detective in the bar the beautiful blonde has to be somebody’s jilted girlfriend in “Dick For A Dame.”  She is a jilted girlfriend but not in a way one would normally expect. Not only does the client, Christina, have the money to pay she is lonely and does not want to be alone.  Her case can wait till the morning light and may ultimately prove to be his easiest case ever.

“What Comes Around” features the beautiful and alluring Victoria, the narrator, and Kim. The three are girlfriends and sexual partners. They also are not the only grifters working in this particular small town.

In “The Two-Fisted Thinker” Lenny uses both hands to hit what he doesn’t understand. Married to Stella that makes Lenny his brother-in-law and his problem. Stella wants Lenny to get out more and has her talented ways of persuasion. Lenny’s ways are different but everything works for the narrator---up to a point.

Amy leaves her husband in “Trophy Wife” and shows up on the narrator’s doorstep with little else besides a black lace teddy, bottle of wine, and some condoms. Though they had talked about it, Amy never was supposed to leave her husband.  Now that she has gone and left him things will be very different. A poet does need his space.

For the narrator, Becky really came through in “Assholes & Alibis.”  The boss may have deserved to die but the narrator didn’t do it.
The titled story of the collection “Sex, Violence & Half a Million Dollars” easily contains all that. It also features a kidnapping, a missing business partner, and quite a lot more in this fast moving short story.

There is sabotage at work in “Going Undercover.”  George Miller wants Lisa to investigate because clearly somebody is after his job. Lisa needs the gig and accepts with far more on her mind than the actual job assignment.

It’s been six months and Fred Williams still does not have a job in “The Interview.”  He does have a wife and she is very unhappy. It’s been a long marriage and Fred didn’t realize how unhappy it was until he was unemployed and home every single day. At least he does have a few leads and an upcoming interview.

Sometimes you just have to follow the woman’s lead in “Tail Tailing.” The client wants the job done and you have to do what you have to do. Sex, videotapes, and blackmail are just a few of the things in play in this one.

Being with two women at the same time has a serious price in “Paying the Price.” He gets exactly what he said he wanted.

The blindfolded married man is supposed to be able to tell his wife’s breasts by lips and tongue. According to the bet he agreed to he will have to go through “Twenty Breasts” to do it. If he guesses correctly he will win 20K that his wife Charlene and he desperately need. If he guesses wrong they will lose everything.

“Love With A Perfect Stranger” describes the ultimate scenario of anonymous sex. The mystery man talked her to coming to dinner. Now he has to close the deal.

It is the only motel in the middle of nowhere and “There’s Cable In Every Room.”  Newly wed Amanda didn’t want to stop for the night, but Steve was exhausted and insisted. Not that they need cable but other folks do in this small town.

The commission check probably isn’t worth the paper it is printed on in “Act Of Commission.”  Being a vacuum cleaner salesman is not working out at all, but at least he does have a couple of promising house call appointments.

The stretches of boredom in the newspaper business are just one of the elements at work in “Those “Were The Days.” A couple of drinks have loosened the tongue of City Editor Johnny Silverman and he tells quite the tale of a deal back in the 30’s and a powerful crime family.

The complex stories that make up this collection feature crime, deceit, murder, double dealing and many other things. They also feature plenty of beautiful large breasted women often working their own agendas. The stories also feature frank descriptions of sexual positions and sexual acts. Very graphic and detailed sex is prevalent in every story and in most cases there is a final twist changing the reader perception of all that has gone on before.

While sexuality is clearly part of each story, the stories are primarily good crime stories and feature the traits that readers of crime fiction writer Michael Bracken know and love. This very adult collection isn’t for everyone, but if you are okay with adult themes and situations, this collection is a very good one.

Material supplied quite some time ago by the author in exchange for my objective review.