Blacklin County in East Texas is home to wild hogs, a Wal-Mart, and more than a few murderers. It has happened again as Murder of a Beauty Shop Queen” opens and Sheriff Dan Rhodes is on the case. Lynn Ashton is very much dead on the floor of a local beauty parlor known as “The Beauty Shack.” Found by the owner of the beauty parlor, Sandra Wiley, it is clear that Lynn’s days of cutting hair are over. 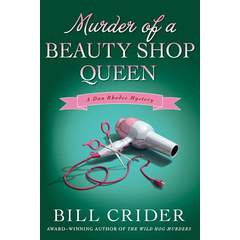 Before she was dead, Lynn Ashton was young, pretty and rather flirty in the way she did things.  Not just the fact she often drove her red Chrysler Sebring Convertible with the top down regardless of the weather, Lynn liked to date men. Whether or not the guy was married didn’t seem to matter to her. Lynn had a bit of a reputation and more and move comes out that isn’t flattering to her or helpful to solve the case as Sheriff Rhodes investigates.

That is when he isn’t chasing folks hiding out in abandoned buildings. The suspects might be responsible for Lynn’s murder, might be responsible for the recent uptick in battery thefts, or might be nothing more than a pair of down on their luck homeless guys who can run faster than Rhodes and his deputies. There is also the small issue of the pregnant nanny goat.

No new ground is plowed in Murder of a Beauty Shop Queen in terms of character development and none is expected in this excellent long running series. After eighteen preceding books, readers get exactly what they expect and want as Sheriff Dan Rhodes will catch those responsible. He may get banged up a time or two, but he will get those responsible for the various problems. Along the way he will deal with his ongoing diet issues, local politics, and think a lot while drinking Dr. Pepper and eating crackers. All that and deal with Hank and Lawton and others including Sarge Barton in another very good book in this series.

ARC provided by the author in exchange for my objective review.