Having reviewed the latest in The Artie Crimes series by Texas author Jan Christensen yesterday, it seemed only fitting that I run my 2004 review of her novel Sara’s Search today as part of Friday’s Forgotten Books hosted by Patti Abbott. For the complete list of the reads later today as well as plenty of other good stuff every day of the week, check out http://pattinase.blogspot.com/  While there, be sure to read about PULP INK 2 and the great stories in it. 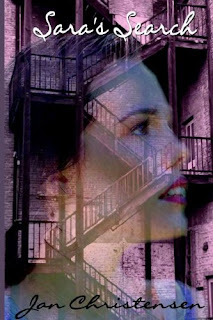 For the past two years and against the strong wishes of her adoptive Mother, Sarah has been searching for her biological father. With her biological Mother dead, her biological father is the only one to have answers to questions that she has and so far she has been unable to find him. That is, until she stumbles across his dead body in a stairwell outside a party she had attended.

In a strange twist of irony and fate, her father was the drunken man who seemed to be staring at her all evening as he followed her from room to room in the spacious penthouse home of her good friend Belinda. Sara hadn't wanted to talk to the man but his gaze followed her everywhere she went. She had no idea why he was following her as she tried her best to avoid him as well as a few of the other more unappealing party guests. His death, at the hands of a murderer, ended any chance for reconciliation and explanations.

Faced with the prospect of never knowing her father while he was alive, Sarah begins to poke at his past through the people he knew. In so doing, she begins to antagonize his family, which is secure in the belief that she could not want anything else but a share of his inheritance. Sarah wants and needs something far more important than money and as she digs, she begins to uncover clues that put her on the trail of her father's killer.

At the same time, beset by problems at work, Sarah is also confronted with the progressive illness of her good friend, Belinda. What began as a possible a case of the flu has steadily worsened with symptoms that baffle her doctor husband as well as others in the medical community. While a possible killer disease is ravaging her good friend, Sara's life is being ravaged by a killer bent on stopping her snooping once and for all.

If you have read Jan Christensen's short stories then you know what to expect. Interesting characters, strong storyline, and tight writing are hallmarks of her work. The same is true here in this very enjoyable debut novel and hopefully just the first novel of many to come.

Long ago I first got this book as an ARC from a publisher that is no longer around.  The book was re-released last April as an e-book by the author.

"Sara's Search" is a terrific book about a woman who lets nothing and no one stop her from doing what she is compelled to do. I recommend it for anyone who enjoys reading about strong, determined women. Few people write them as well as Jan Christensen.