Earlier this week I learned that Paul Doiron has a third book in this series coming out titled, BAD LITTLE FALLS. I had no idea that another one in the series was coming out. I’m currently reading the second book in the series titled TRESPASSER. So, with news that another book was coming out as well as the fact I will soon review the second book, it seemed that is was appropriate to take another look at the debut mystery THE POACHER’S SON. Make sure you check out the entire Friday’s Forgotten Books list over at Patti Abbott’s blog at http://pattinase.blogspot.com/ 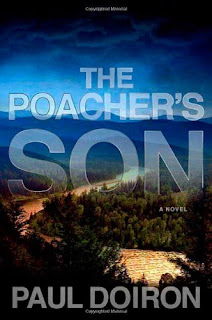 After working a bear sighting case and calming down the irate homeowner, Maine Game Warden  Mike Bowditch comes home late one night to find a cryptic message on his answering  machine left by his father, Jack Bowditch.  They haven’t spoken in two years and the message isn’t much beyond the fact that his dad is clearly in some sort of trouble.  His Father lives off the land in the north woods of Maine and doesn’t recognize that the government can tell him when he can kill what. He is a man that never should have married, or fathered a child, and yet he did both.  Mike never measured up to his dad’s standards and for Mike, the feeling is mutual.

Instead of hearing it from his dad, Mike has to learn from his supervisors that his dad is a suspect in the ambush murder of Deputy Bill Brodeur and Wendigo Timberlands spokesman Jonathan Shipman. Wendigo is buying up the land in the area and generating lots of anger and threats from the locals who are losing their homes and their way of life.  Deputy Brodeur was driving Shipman to a motel after a contentious public meeting and both were gunned down in the police cruiser.  They never had a chance.

In trying to clear his dad, Mike Bowditch not only risks his professional career and his life, he is forced to deal with his painful past.

While this debut novel has all the usual clichéd stereotypes such as the violent drunkard father committing illegal acts, the son who wound up trying to be different than good old dad by joining law enforcement, the girlfriend who loves him but can’t stand his lack of money or inability to open completely up to her as well as others, author Paul Doiron uses his expertise on the area and his writing skills to make the book work.  Reminiscent of the work of C. J. Boxx, Paul Doiron brings the land and the characters alive in a way few authors can do. Shifting in points of view with Mike Bowditch always primary for readers, the read moves along at a fast clip despite the frequent use of flashbacks to back fill the history of characters.

Sure to appeal to readers familiar with the local color and flavor, this novel also works for those of us who have never set foot in Maine. This novel is a very strong start to what could be a very good and highly entertaining series.

While the novel is carried in my local library in Plano, TX, I received this ARC by the way of the Amazon Vine Program.

Compelling review. Makes a person "not your audience" think she might like to read a little of THE POACHER'S SON. Thanks for the enlightenment.

Thank you for reading, Sharon. The second book is even better.