Author Terry W. Ervin II takes readers back to the complicated world of Mercenary Flank Hawk (Krish) in the compelling sequel Blood Sword: A First Civilization’s Legacy Novel. The Necromancer King is in retreat with defenders of the kingdom of Keese in pursuit. War has taken a heavy toll on both sides and the Keese Kingdom has been weakened and is vulnerable. Prince Reveron has been worried about a possible attack through one of several passages through Pyrenees Mountains. While others, including those in the military, scoffed at the threat Grand Wizard Seelain had volunteered to go watch. She took Flank Hawk with her as her guard. 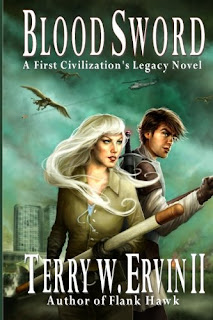 Good thing on both aspects they are there to see, not only the first troop movements of the coming invasion, but the fact that the invaders have local assistance. Barely escaping with their lives they make it back to the King’s City to discover the attack is fully underway. It isn’t taking just the form of land invasion. Led by Fendra Jolain, Goddess of Healing, those with the magical power to heal others have either fled or used their magical skills to attack those around them. In the carnage it is clear that few with magical skills, healing or otherwise, remain committed to the kingdom of Keese and its people. Instead, they have allied themselves with the powerful Fendra Jolain who has chosen this moment when her two most dangerous foes are weakened to attack.

For anyone to survive and for the kingdom of Keese to be saved, Flank Hawk, Grand Wizard Seelain and others will have to make a perilous journey to the western continent. Their quest is to once again locate the immortal Colonel of the West and negotiate the return of the Blood Sword.  A magical weapon with deeply evil properties it represents their only chance to survive.


This is one of the cases where a book review does not really tell you just how good this book series truly is on every level. Building upon the first book, Flank Hawk, author Terry W. Ervin II pulls readers back into a world that is our own thousands of years in the future where magic and the sword rule the land from the opening page. Not only does he further develop a number of characters through the skillful use of dialogue and character reactions, he also further develops the world he created that continues to go through war. War takes a tremendous toll on all involved and that is shown here through many characters who are not fighters but civilians caught in the chaos and upheaval. Their stories are just as important as those directly involved in the politics of the kingdom or fighting for their survival in battle. Those non-military non-royal types receive equal treatment in this compelling series.

Blood Sword: A First Civilization’s Legacy Novel  is one of those books that truly has a lot of things going on at the same time putting the “epic” in Epic Fantasy. The result is another fantastic installment in what has become a great series. Using the basic idea of the quest in both books, the author has created complex multidimensional humans and creatures working together and against at a time in a possible far future of our world.  Blending some science fiction fact, plenty of fantasy, some mystery, and lots of other elements, the world and those that populate it quickly come alive in a series that just gets better and better.

If you have not read the first book Flank Hawk: A First Civilization’s Legacy Novel please do so before reading this book. Reading out of order will definitely hurt your reading experience regarding this series. My review is here.


According to his Facebook group tiled “Flankers”, in addition to promoting his short story work in new anthologies, the author is currently at work on the next book in the series titled Soul Forge.

Kevin,
Thank you for taking the time to read Blood Sword and to post a review. I'm glad you enjoyed the story!

Thought it was great, Terry. Hopefully I conveyed that much.