The late Donald E. Westlake was a versatile writer whose output ranged over a number of  fields. But it is crime fiction for which he is most famous, for which he was deservedly acknowledged by the Mystery Writers of America as a Grand Master, and in which  he wrote under his own name and under a variety of pseudonyms. Under his own name he will always be remembered as one of the greatest exponents of the comic crime novel with titles that include The Hot Rock, God Save the Mark, I Gave at the Office, What's the Worst That Could Happen?, and Two Much.

As Richard Stark, probably his best-known pseudonym, he produced a very successful series of ultra-hardboiled novels, several of which were filmed—see The Thrilling Detective website for more information. The books starred Parker, a professional thief: "Once or twice a year, Parker was in on an institutional robbery...It wasn't out of humanity that he limited himself to organizations, it was just that organizations had more money than individuals....

"Parker wasn't a single-o. He always worked with a pickup group gathered for that single specific job. Every man was a specialist, and Parker's specialties were two; planning and violence. Other men were specialists in opening safes or scaling walls or making up blueprints from nothing more than observation, but Parker was a specialist at planning an operation so it run smoothly, and at stopping any outsider who might be thinking of lousing things up."

The premise of The Jugger, the sixth book in a series which does not necessarily have to be read in order, is fairly simple. Joe Sheer is a jugger, a safecracker, living in the small town of Sagamore, Nebraska under the name Joseph Shardin. Now retired, he sometimes acts as an intermediary between Parker and others in his particular line of work. He writes to Parker who, when not pulling heists, lives in Miami under the name Charles Willis, an identity he has painstakingly constructed over a period of years. Sheer's first letter indicates that he's in some kind of trouble, that he'll handle it, but that Parker shouldn't try to contact him until the matter is settled. A month later a second letter arrives, this one asking for Parker's help. Parker packs a bag and, as Charles Willis, goes to Sagamore. He does so not out of loyalty or friendship toward Sheer—there is nothing noble about him; he does so for the sake of self-preservation. "Joe Sheer could crucify Parker, he could nail him to the wall with a hundred nails...He knew him by his old face...He knew Parker's cover name, he knew twenty or twenty-five jobs Parker had been connected with, he knew enough about Parker to skin him alive."

Simple premise, right? All Parker has to do is find out what kind of jam Sheer is in and either help him out of it or kill him to protect himself. But not long after he arrives in Sagamore, things quickly become complicated. Sheer is dead, but nobody will level with Parker about how he died. A man named Tiftus, who "claimed to be a lock man" whom "Parker had never worked with...because he was too unreliable" shows up at Parker's hotel room, wanting to partner to find something valuable he's certain Sheer had hidden somewhere.

Parker goes to Sheer's house to look around for himself and is knocked unconscious by someone wearing a burlap bag for a mask. Not long afterward, Tiftus is found dead—in Parker's hotel room. Now Parker must deal with the corrupt Captain Younger, local head of the police department, and the honest, earnest state police investigator Regan—while trying to tie up loose ends, absolve himself of a connection to Tiftus's murder, find the actual killer, and ditch an unwanted new associate. 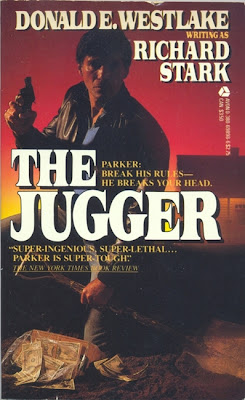 To say anything more would be to spoil the excitement in this taut short novel. The Jugger is as hardboiled as anything Mickey Spillane ever wrote, but without the posturing. Parker is cold, efficient, and ruthless, the complete anti-hero. He lets nothing and no one stand in his way when he's trying to accomplish something. Even readers who think they're inured to fictional criminal activities might be surprised by  some of Parker's. Although he's repellent to anyone with moral sensibilities, he's so intriguing that readers who go for noir fiction will want to follow his adventures, a testament to Westlake's authorial skill.

As the quoted passages demonstrate, the author doesn't waste words, doesn't indulge in the kind of verbal pyrotechnics that can dilute and obstruct a narrative. Thus, the story's relentless pace infuses it with a raw power. The no-nonsense style reflects Parker's no-nonsense approach. A further testament to the author's skill is his ability to portray breathing, individualized characters—this despite the fact that the reader is given background information only about Parker and Captain Younger.

The Jugger is one of the many titles Barry Ergang is selling from his personal collection. You can see the lists at http://www.barryergangbooksforsale.yolasite.com/ 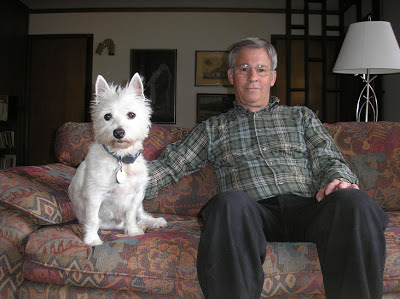 I've only recently started to get into hardboiled fiction, but I must say Westlake's was superb. It gripped me from the very first page of THE HUNTER and I decided to read the series in order-- my last one was THE MOURNER. (I don't want to overdose on Parker!)

I think this might be even tougher than Spillane's stuff. While Spillane had some talent for storytelling, I can't get into Mike Hammer very much because he enjoys murdering and hurting people far too much for my tastes. The way he handles the killer at the end of I, THE JURY, for instance... and apparently in one novel he sets the killer on fire?

Parker doesn't go for those pyrotechnics. He avoids killing when he can, but only because it makes cleaning up more difficult, not out of some moral code. If you're in his way, he'll remove you by any means necessary, even murder. But he'll just up-and-do-it, a quick shot to the head and his path is clear once more.

I think that's what fascinates and terrifies me about Parker. He is a man led strictly by logic, and no emotions whatsoever (except, arguably, in the case of his late wife, but let's not get into that now). As someone who prizes logic and reasoning, it's a chilling reminder of just how important emotions are and what an integral part of basic humanity they form.

THE JUGGER was one of my favorite "Richard Stark" novels. My all-time favorite Parker novel is SLAYGROUND.

This has one of my all time favourite segments. There's this teenage boy who is somehow onto what Parker is up to. Parker in turn gets onto him, slaps him around and then (re-translated from Swedish):

But the boy came back. He was carrying a small bag.
- I put the letter on the kitchen table, he said.
- Good, said Parker and hit him twice.
He buried him in the basement, in the same hole the boy had dug himself.

I think it was James Ellroy who said that violence should be swift and to the point. Westlake gets an A+++ on that.

Grateful for comments, but spoilers are not helpful.

Oops, did not intend to post a spoiler. If it's any consolation, the part I quoted is rather peripheral to the overall plot and has little - if anything - to do with the final outcome. I evidently ruined a great shock moment, however. My apologies.

Yes, that was the moment I said might surprise readers despite their being accustomed to Parker's capacity for violence.