Friday means Friday’s Forgotten Books hosted by Patti Abbott. Please welcome back Barry Ergang and make sure you check out the other reading possibilities here after you read the review below……

After killing the town of Prospect's deputy sheriff and wounding banker Jim Thornton, Jake Lamotte and his gang think they've successfully gotten away with the fifty thousand dollars in gold coins they stole from the bank. When a posse is obviously gaining on them, Lamotte decides their best move is to head into the Pequino Mountains, where they might lose their pursuers. "If we can't," Lamotte tells the other five men, "we'll hold 'em off in the cave. We could stand off an army there, I reckon." 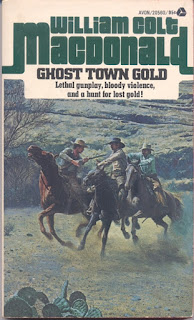 His prediction is wrong—fatally so. They fight it out with the posse for two days, managing to kill some of them, until their own guns are silenced. When members of the posse enter the cave, they find the outlaws' bodies. What they can't find is the stolen gold.

Twenty years later, three men ride into Prospect. "The three were Tucson Smith, Lullaby Joslin and Stony Brooke, owners of the 3-Bar-O Ranch, pardners (sic) in the breeding of cattle, tracking down of law-busters and in general all-around trouble-shooting...(M)en called them by various names...Probably the title which fitted them best and by which they were most widely known was that of The Three Mesquiteers."

Leaving their ranch in the capable hands of employees, the Mesquiteers have come to Prospect, according to Tucson, to look at and possibly purchase some bulls from cattleman Marty Barrett. On the trail Tucson briefly relates the story of the Lamotte gang and the missing gold, which he'd learned from Barrett the year before at a cattlemen's convention, and Lullaby immediately knows the business about the bulls is...well, bull. Tucson wants to search for the missing gold. Stony, who always craves "real excitement," is as eager to proceed as Lullaby is exasperated about a probable wild goose chase.

Mostly an action-loaded western adventure but also partly a detective story—though not of the fair-play variety—Ghost Town Gold teams the Mesquiteers with pretty Sabina Thornton, daughter of the late banker; a feisty older woman named Stampmill Randle; Marty Barrett; and Border Ranger Jerry Woodruff, to try to solve multiple mysteries, one of which is a murder. Who has been sending Sabina notes directing her to the ghost town of Nemesis with the promise of recovering the missing gold? Who has taken a potshot at the Mesquiteers soon after their arrival in Nemesis? What about the so-called Dragon Man? Is he just an elderly eccentric or someone more sinister? 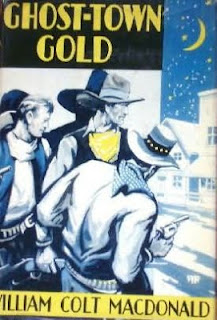 Complicating matters is the presence in Nemesis of Dirk Barrington and his gang. Although they have another reason for being there, they want the gold for themselves and have no reluctance about killing to obtain it. Having been denied rooms at the Nemesis Hotel by the Mesquiteers, who with their friends are staying in the long-abandoned establishment, the Barrington gang has taken up temporary residence across the street in the Blue Bird Theatre. A showdown is inevitable.

Ghost Town Gold is pure entertainment of the pulpiest kind, and is recommended to readers who aren't concerned with psychological portraits, philosophical digressions, or poetic prose, and only want some rip-snortin' fun that includes pounding hooves and six-shooters spurting hot lead. If I have a nit to pick, it's the one concerning admonitions to writers about speech attributions that William Colt MacDonald consistently violates. Instead of letting said and ask stand alone, he almost invariably tacks on an adverb—e.g., "he said darkly." Or—more frequently—he shuns said in favor of other words: yelled, howled, bragged, denied, drawled, jerked out, sneered, to cite a handful. The story's mix of mystery, suspense, action and humor will most likely have readers galloping past them.

A Derringer Award winner, some of Barry's written work is available at Amazon and Smashwords.
Posted by Kevin R. Tipple at 12:30 AM