Friday means Friday’s Forgotten Books. Please welcome back Barry Ergang and make sure you check out the other reading possibilities here after you read the review below……

THE LONG GOODBYE by Raymond Chandler
Reviewed by Barry Ergang

Mark Twain defined a classic as “a book which people praise and don't read.” The point is well-made, although Twain was fortunately wrong. People still read Huckleberry Finn, Tom Sawyer, A Connecticut Yankee in King Arthur's Court, and The Prince and the Pauper. 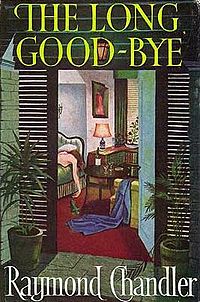 They still read Raymond Chandler, too. Chandler, along with Dashiell Hammett and Ross Macdonald, is the chronological second in the Supreme Triumvirate of the “hardboiled” school of mystery writing. All three worked in what was long considered a second-rate genre and elevated it to the status of “serious literature.” Chandler garnered accolades from, among others, cantankerous critic Edmund Wilson and poet W.H. Auden. In his first five novels, Chandler worked within the traditions of the genre but added his own distinctive touches. These included character development well beyond that found in the work of most of his peers and a writing style that was among the most influential of the Twentieth Century. Critics have called Chandler's style “the poetry of violence,” and Chandler “the hardboiled Shakespeare.”

Wisecracks and wry social commentary came from Philip Marlowe, the cynical but never quite despairing shamus with the unstated but steadfast code of honor and incorruptible character in a morally ambiguous world where chivalrous behavior no longer matters, whose brisk, simile-laden first-person narratives set the tone for generations of Chandler's/Marlowe's followers. (The best include Earl Emerson's Thomas Black and Stephen Greenleaf's John Marshall Tanner. The worst is the pretentious Robert B. Parker's Spenser, the Philip Marlowe wannabe with the New England pallor.) Marlowe was not the first private eye in literature, but he became the quintessential one. In his sixth book, The Long Goodbye, Chandler pushed beyond the boundaries of genre conventions. More than either his predecessor Hammett or his successor Macdonald, Chandler succeeded in blending elements of the hardboiled detective story with elements of the mainstream novel. The reader who approaches The Long Goodbye expecting lots of slugfests and gunplay will be disappointed.

There is action, certainly, but not in the quantities found in earlier Chandlers--The Big Sleep; Farewell, My Lovely; The High Window; The Lady in the Lake; The Little Sister--or in Mickey Spillane and Ian Fleming. The Long Goodbye should be approached as a novel that happens to deal with Philip Marlowe, who happens to be a private detective, and who happens to get involved in a murder case. Thematically it is much more. It is the story of a man who tries to do the right thing from deeply felt loyalty and conviction, who is punished and betrayed for his efforts. The story begins when Marlowe lends well-intentioned assistance to a drunken Terry Lennox, abandoned by his much-married wealthy ex-wife Sylvia in the parking lot of a Hollywood nightclub. Over a period of months, their acquaintance develops into friendship. Lennox and Sylvia eventually remarry, but their relationship is neither happy nor healthy.

When, very early one morning, Lennox shows up at Marlowe's home, demanding the detective drive him to a Tijuana airport, Marlowe agrees to play chauffeur. He knows intuitively that Sylvia is dead, but his instincts tell him Lennox is not her killer. Returning to L.A., Marlowe is arrested on suspicion of murder, assaulted by the police, and jailed for several days. When word comes from Mexico that Lennox committed suicide and left a confession, Marlowe is released, disbelieving the confession based on his knowledge of Lennox. As he remarks, “A dead man is the best fall guy in the world. He never talks back.” The next day, Marlowe gets a visit--and a warning--from a powerful local hood named Menendez, who tells him to forget the Lennox case. Menendez, Lennox, and Las Vegas-based hood Randy Starr were in the Commandos together during WWII and Lennox saved their lives. Menendez resents that Lennox, when in trouble, sought Marlowe's help rather than his and Starr's. It also becomes increasingly clear that details of the case have been quashed by Lennox's influential multimillionaire father-in-law, who values his and his family`s privacy above all else. 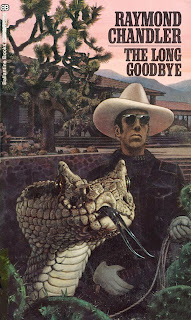 Soon afterward, Marlowe is consulted by a New York publisher who wants him to babysit a bestselling historical novelist named Roger Wade. Wade, an alcoholic, has been unable to finish his latest novel, and the publisher wants Marlowe to keep him off the booze and at the typewriter. Marlowe refuses the job as an impossibility, but when Wade suddenly disappears, he's hired by the writer's beautiful wife Eileen. When Marlowe finds him and brings him home, he becomes almost inextricably involved with the Wades' tormented lives. The seemingly disparate plotlines eventually converge, other deaths occur, and Marlowe solves two murders--with some undesirable surprises. All of this sounds like standard mystery-novel fare. What sets it apart from the run-of-the-mill are Marlowe's and other's comments about society, crime and criminals, wealth, and power; the interplay among the well-defined characters; strongly visualized scenes; and the motifs: pride; honor; the abuse of official or private power; and the traps we set for ourselves.


Why review a well-known novel originally published in 1954? I recently reread it for the sixth time, rediscovering again Chandler's virile prose-poetry, irresistible storytelling abilities, and timeless observations. I thought it appropriate to recommend The Long Goodbye to readers who have not yet come to it, and to remind those who have that it is eminently worth reading again. To those who have only ever seen Robert Altman's feebly inaccurate film adaptation: read the book! With all due respect to Mark Twain, not all classics are ignored.

(A shorter version of this review originally appeared in
Maelstrom, Volume IV, Issue 3, 2003)

Now on my TBR. Great review. We get the heart of the book without spoilers, as always.
Lala

I'm glad you liked the review and that it prompted you to read the book. It's my all-tme-favorite novel, mystery or other, so I hope you enjoy it.

I have read and enjoyed both Emmerson and Greenleaf but I think Parker is superior to both. Nonetheless, I agree that Chandler is head and shoulders above any other crime writer I've ever tried

I'm glad we agree about Chandler, Ron, but we'll have to agree to disagree about Parker. I gave up on him after the first dozen or so Spenser novels. Initially he was very derivative of Chandler. But ultimately Spenser became, for me at least, both childish and somewhat hypocritical. There is a scene in--I think it was--Looking for Rachel Wallace in which Spenser gets into a confrontation with a restaurant patron that was right out of a kiddie matinee B-western.

Spenser loved to go on about his "code," despite Chandler's stricture that a good man, a hero, just lived it without talking about it. But he also violated it by using Hawk to do his dirty work.

I once read an interview in which Parker said he began writing fiction with the knowledge that he was incapable of writing The Sound and the Fury but that he could write The Big Sleep. He never came close to the latter, and his "sequel" to it, Perchance to Dream, was a lame waste of time--as was his "collaboration" on Chandler's Poodle Springs.

Thanks for this. It settled a few things into place for me, although have to admit have only read TLG once only, and that was about 20 years ago.