It is July 13, 1977 in New York City as the High Heat: A Jack Reacher Novella opens and Jack Reacher is three months shy of his 17th birthday. It is 8:30 in the evening on a day that has been a scorcher. He has just witnessed some sort of altercation between a man and woman that has resulted in the woman being slapped in the face.

A son of a Marine does not allow that to go unchallenged. 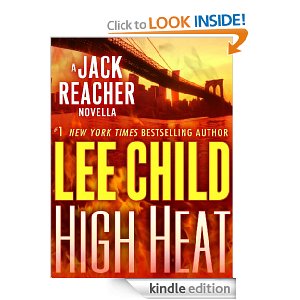 Being the son of a Marine that was stationed all over the world means that Reacher knows how to fight. In the aftermath of the inevitable, Reacher learns that the woman is an FBI agent named Jill Hemmingway and the vanquished guy was an organized crime figure named Croselli. Croselli made threats and will be one of several reasons why Reacher will be late visiting his brother, Joe.

While the story is decent enough as it goes, this novella that includes a preview excerpt of the upcoming novel Never Go Back does have issues. The Reacher of High Heat does not come off as a 16 year old kid. Not only is he fully formed physically and has many excellent fighting skills because of having to deal with fellow kids all over the world at various bases, the 16 year old Reacher sounds exactly as he would now in his use of language. The same adult sarcasm streak is not only present; he uses the same type of phrases, verbal tactics, logic progression comments, etc. It is very hard to believe in reading Reacher’s dialogue that this is a sixteen year old kid. If one accepts that then one has to deal with other issues in the novella.

Several believability issues can't be addressed simply because to do so here would reveal key plot points later in the short book. However, it is worth noting that for rather unbelievable reasons, the female FBI agent eventually accepts Reacher's help in her case.

While some have questioned whether or not Lee Child actually wrote this book, I don't have that issue with High Heat: A Jack Reacher Novella. To this reader the book definitely reads as if Lee Child wrote it. My issue with the book is that it has weaknesses and primarily comes across as a marketing tool that is being used to fill time between novels as a way to advertise the upcoming book. Since I am not one of those readers that read preview excerpts at the back of books that aspect is meaningless to me.

If one can get by the idea that a 16 year old Reacher would sound the same as a middle aged Reacher as well as some of the other coincidences and plot points in High Heat: A Jack Reacher Novella delivers a read that has all the Reacher hallmarks. A little fighting, a little loving (even at 16 Reacher has his way with the ladies) and a lot of Reacher observing and assessing his environment and tactical situations. It is enjoyable if you can steadfastly maintain your willingness to suspend your disbelief.

This material was purchased for my use in an objective review by using a gift card received from my participation in the Amazon Associates Program.

Not sure why, but I read the first Reacher novel and enjoyed it quite a bit. But I've never been inspired to pick up another(and I have a half dozen or so bought all at the same time). I read and enjoy similar characters all the time.