The recently released Thuglit: Issue Six keeps the reading momentum of recent issues going with eight more hard hitting stories to mess with your mind. Characters at the edge and desperate for a way out no matter the odds populate these stories in locales familiar and not. As always in the Thuglit series, these are short stories so in the interest of avoiding spoilers, details will be limited. 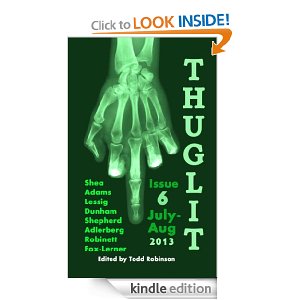 This issue opens with “PIN” by Hugh Lessig. The robbery of the customer after he left the ATM went off without a hitch. Everything went like Tory planed and told him it would. But, nobody planned for what would happen when they pulled it off.

After being in the Norfolk vicinity in the previous story it is off to Asia in “Wheels” by Rena Robinett. Nick trained her long ago how to move drugs by being a smuggler. She is good at it though she does have a problem as her flight has been grounded short of her destination by bad weather. That is definitely a problem. So too is the increasing interest being shown to her by a friendly stranger.

The next three stories take readers back to the United States before leaving again. The first one is “Come on Home” by Scott Adlerberg where the marriage is in trouble and both parties know it. Carla believes he is cheating and expects him to call in precisely at 10 pm from work as a way of proving he isn’t cheating and is actually working. The fact that he is at least forty-five minutes late with the call is going to make her very unhappy.

Eating a sub sandwich and cleaning your gun at the same time can be done. It may not be the smartest thing ever to do, but that February evening Mike “Muzz” Mukowski was absolutely starving. He wanted that sandwich and had been thinking about it all day. That wasn't the only thing he wanted and had taken in recent days. He really should have thought of the repercussions in “Having Chiqui” by Kieran Shea.

Louie and Vince set up a drug deal with Pete and now things are getting a bit strange in “Soul Collection” by T. Fox Dunham. Philly may be a big place, but Louie is sure he knows Pete from somewhere and just won’t let it go. All Vince knows is what should have been an easy piece of business is not turning out so easy after all.

“Sweet Caroline” by Jessica Adams takes readers to Cabo San Lucas and a pregnant woman and the choices she has to make. It isn't like James is still around to be involved now.

Aaron Fox-Lerner takes readers to China in “The Ghost Wife.” Mallory wanted to go China and be an English teacher. Her boyfriend went with her as a big romantic gesture. But, Wu Dong is the real China in all its smoke belching glory and they were not remotely prepared for the experience. They don’t fit in and they don’t have any real way out which leads to a desperate gamble.

The legendary Sanchez Penitentiary sits outside the city of El Paso, Texas. It is home to some of the most deranged and vile human beings mankind has ever spawned. “Rogues Gallery” by B. H. Shepherd tells the tale of some of those inmates currently hidden way from civilization.

Those eight tales are followed by author bios as well as other suggested books to read.

Thuglit: Issue Six is a good one featuring solid stories filled with characters in desperate situations. There is not an obvious theme to the issue beyond the basic idea of characters in a variety of settings and circumstances experiencing desperation of various types. Sometimes the tiniest of things has disrupted their plans. Other times the worst thing possible has happened thanks to a monumental error by themselves or others. Consequences are always present as is the suspense and the danger. At an estimated 134 pages the latest issue delivers another quality and varied read.

Material was purchased for use in an objective review by way of an Amazon Gift Card payment for my participation in the Amazon Associate Program.