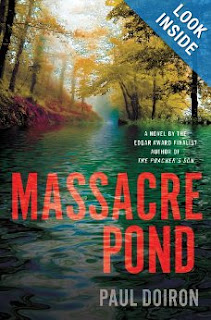 wonders what exactly is going on because nature certainly isn't behaving herself. Neither is man because Bowditch's friend Billy Cronk has found a nightmare at the expansive estate of Elizabeth Morris where he works. Ms. Morris is incredibly wealthy and has been quietly buying in significant numbers various adjoining parcels of land. In a highly controversial move she has fenced off the land, evicted those who lived there and didn’t have land rights, and announced her intention and desire for the entire area to become a national park. The backlash from the timber industry and others who need the jobs and income that access to the land provides has been intense.

It is one thing to write a hate filled letter promising death and worse to Ms. Morris. It is another to get past her fences and gates and gun down a moose. At least a poacher would have taken the meat. Whoever did this didn’t bother to take the meat and instead left it to rot in the woods. The first dead moose that he leads Game Warden Mike Bowditch to is the not the only one Billy discovered dead and left to rot. What Billy found is just the first of several moose that were senselessly slaughtered in what will become a legendary crime for the Warden service as well as a major media incident.

Award winning author Paul Doiron once again takes readers on a suspenseful mystery ride in the Maine woods. As he did from the very beginning with The Poacher's Son (reviewed here) he combines a powerful mystery with the actions and duties of the men and women whose job it is to protect nature in all its forms from the misuse and abuse of mankind. Much like what C. J. Box has done for Wyoming; Paul Doiron has done for Maine through four very good books to date.

At its core Massacre Pond is an intense mystery that has human as well as animal victims. The massacre of the moose is just the first point of a complex case that will result in a number of deaths and complications as other events come to light. Human frailty is a major point in the book through primary and secondary storylines, as is economics, politics, and access to power thanks to money and social standing. These Maine woods may be lovely, dark, and deep, but they also are full of danger in many different ways.

Material Supplied by the good folks of the Plano Texas Public Library System.