Pastor Walker “Bear” Wells and his wife Annie Laurie get plenty of dinner invitations. But, being invited to Gina and John Redman’s house is always a special treat. This one was as well and the coolness of October evening had allowed the four to sit outside on the Redman’s back porch and enjoy the Texas evening. That is until the text from their 15 year old daughter, Jo, hit Bear’s cell phone.

That was the message. She doesn’t answer each time they call and the ten minute drive home by Bear and Annie is the longest in their lives. They arrive to find Jo in her bedroom, alone and unhurt, with the family dog, Bat Bear. But, Jo is not alone. 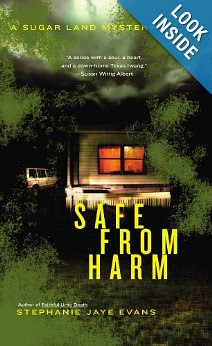 Dead in her arms is the child of a family they know. Phoebe Pickersley, a troubled child who was once Phoebe’s friend, is most definitely dead.  What she was doing in their house and why will be almost as important as determining how she died. The fact she dead in their house to be found by Jo automatically makes Jo a suspect. The fact that they had clashed more than once in recent weeks, among other facts, makes Jo a suspect. A suspect who, like most teenagers, isn’t going to willingly tell all and has her own mind as to how to clear her name.

This is the kind of situation that makes your hair turn grey as a parent. Following up on Faithful Unto Death this strong sequel brings back characters familiar to readers while adding a number of new ones. Character development is further established with the returning characters as we learn more and more about them. The new characters are multi-faceted complex human beings as well bringing a fuller richness to the book.

A religious faith remains a strong part of this series. As in the first book, there are no simple and easy answers regarding life’s troubles and events. While faith is referenced and always present through the book, there is not sermonizing and there is acceptance of other belief systems. That acceptance is not automatic as Pastor Wells learns both as a parent and as pastor.

At its core Safe from Harm: A Sugar Land Mystery is about familial relationships---- the good, the bad, and the flat out evil ugly. Flat out evil ugly is why there is a murder mystery at the heart of the book. But the book is more than just that. How we interact with each other during good times and times of great stress is a part of this complex mystery. In this series, families and personal connections matter and take precedence over many other things.

Those who choose to read this series in order will appreciate the character growth, complexity of situations, rich storytelling, and the fact that Texas author Stephanie Jaye Evans writes smart, complicated mysteries that provide very good reading.


If you have not read the first book of the series, Faithful Unto Death, my review can be found here.