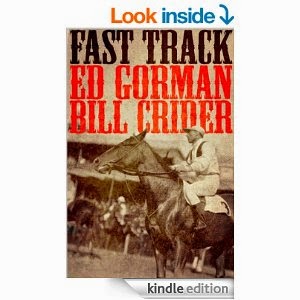 Rock Creek is an old mining town and Mallory has no choice but to get off the train now. His only option to get back more than forty miles to Corvair will be buying a horse. A major horse race with lots at stake happens in seven days in Corvair and Mallory has to get there as soon as possible. Mallory form a secret federal agency that is so secret it has no name and Tess from the Secret Service were assigned to protect the most famous race horse in the world named Starcrossed at the most famous horse race in the world. According to the U.S State Department it would also be a good idea to protect Prince John Brean of the Isle of Worthingham near Scotland, but the unnamed agency head known as “the Boss” is far more worried about the horse than anything or anyone else.

With his partner missing the assignment for Mallory just got much harder. With fifteen years of experience working for the agency plus plenty of time doing other things prior, he knows anything can happen at any time. Letting his guard down once got him drugged. Mallory isn't about to let his guard down again.

It soon becomes clear that there are some who want Starcrossed poisoned so it does not race and have taken Tess as a hostage to force Mallory to get that job done. He has less than a week to resolve things satisfactorily and the odds are not in his favor. The suspect pool is large, other agendas are at work, and much is at stake personally and professionally.

Fast Track by Bill Crider and Ed Gorman may be set roughly 100 years ago, but the issues in horse racing are almost as prevalent today. Recently released in e-book form by Rough Edges Press this is a complicated mystery western tale full of action, intrigue, and suspense. Rich and detailed in terms of characters and setting with plenty of twists and turns the read is a good one and well worth your time.

Material purchased to read and review using funds in my Amazon Associate account.

I have to admit, this sounds like a book I must read. Thanks!
Marja McGraw

Got this one. Enjoyed it.