This week for Friday’sForgotten Books hosted by Patti Abbott Barry Ergang is back with his review of NIGHT SQUAD by David Goodis.

Corey Bradford used to be a cop until he was thrown off the force when “they caught him accepting a handout from a houseman. It wasn’t carelessness on Corey’s part; he was always very smooth and he timed every move….He was on friendly terms with all the neighborhood hustlers and scufflers, the numbers writers and unlicensed hooch sellers, the professional females and dice-table bankers. When he was nabbed, it was due solely to the persistence and drive of certain investigators from city hall. There was a campaign going on, and aimed specifically at badge-wearing shakedown artists, and Corey was one of many who got busted.”

Divorced, beset by a conscience he tries futilely to suppress, searching for the flimsiest kind of redemption even if he doesn't always consciously realize it, he now lives in a cheap rooming house in the neighborhood in which he grew up, a section of the city known as the Swamp that is “on the outskirts of the big city and on three sides it was bordered by swamplands.” Something of a pariah to the so-called Swampcats, as the area's denizens are called, he spends most of his time drinking at a bar called the Hangout and, when he has the money for it, gambling. There's always a poker game going on in the back room of the Hangout, and on the night the novel opens, Bradford has three dollars and forty cents to his name. He decides to try to parlay it into a few bucks more. 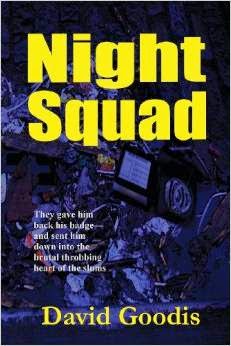 Among those in the game is Walter Grogan, a man who lives in and owns nearly all of the Swamp, including the Hangout: “All his business activities were centered in the Swamp and the same applied to his social life...Although he had considerable cash—estimates of his wealth ranging anywhere from one hundred thousand to more than a quarter of a million—it seemed that everything he wanted or needed was in this neighborhood of wooden shacks, tarpaper hovels and narrow alleys.” He also has at least one police captain in his pocket, as Bradford learns after a couple of masked hoods burst in with the intention of killing Grogan and he, Bradford, prevents it. This results in Grogan putting him on his payroll, with a huge reward if he's successful in finding out who hired the hoods. But when Detective-Sergeant Henry McDermott, head of the Night Squad, a dangerous and dreaded police division, reinstates him and assigns him to investigate Walter Grogan, Bradford's life becomes not only more complicated but also far more at risk—from both sides, as well as from some other parties.

That's the core of the storyline, but Night Squad is not a plot-driven detective story. It has all the requisite action, tension and suspense one expects from noir fiction, but its real emphasis is on character interaction and setting. Author David Goodis is a dregmeister, to coin a word, more interested in portraying the lowlifes, luckless and losers, and the squalid milieu they inhabit, than in presenting a tightly plotted, by-the-numbers tale.

The novel had a relentless pull, at least for this reader, which made it very hard to put down. Populated with more than a few complex characters, it's written in a spare, gritty prose style. I read the Kindle edition, which had a few—and really only a few, not enough to drive sticklers crazy—punctuation errors and one or two typos. The most frequent punctuation error concerned multiple paragraphs of speech by a single person. Properly, there should be quotation marks at the beginning of each paragraph but only at the end of the final paragraph. Whoever created the Kindle edition put quotation marks at the end of every paragraph. Nevertheless, it's not really confusing because the author does a good job of delineating characters via their speech patterns. Thus, the reader knows what individual is making the multi-paragraph speech.

Night Squad is the fifth novel by David Goodis I've read, and I look forward to reading many more. Strongly recommended to fans of classic noir.

For more about David Goodis, see https://en.wikipedia.org/wiki/David_Goodis and http://www.davidgoodis.com/
Posted by Kevin R. Tipple at 12:30 AM